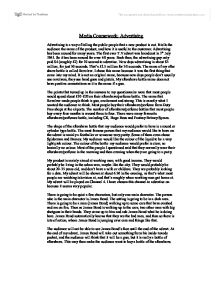 Media Coursework: Advertising Advertising is a way of telling the public people that a new product is out. It tells the audience the name of the product, and how it is useful to the customer. Advertising has been around for many years. The first ever T.V advert was broadcast in 1st July 1941. So it has been around for over 60 years. Back then, the advertising guy only paid $4 (roughly �2) for 10 second to advertise. Now days advertising is about $3 million, for just 30 seconds. That's �1.5 million for 30 seconds. The name of my after shave bottle is called Revolver. I chose this name because it was the first thing that came into my mind. ...read more.

walking up to some cars that have crashed and are on fire. Then as James Bond is walking up to the cars, two other man with big shotguns in their hands. They come up to him and ask James Bond what he is doing here. James Bond automatically knows that they are the bad men, and then so there is lots of action, where James Bond is jumping over cars and things like that. The audience will not be able to see James Bond's face until the end of the advert. At the end of my advert, James Bond will take out something from his inside tuxedo pocket, and the audience will think that it will be a gun, but it is really a bottle of aftershave. This may then make the audience want to buy a bottle of the aftershave. ...read more.