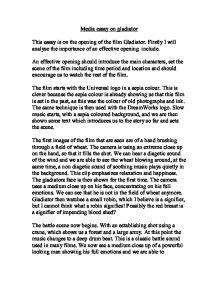 Media essay on the opening to Gladiator

Media essay on gladiator This essay is on the opening of the film Gladiator. Firstly I will analyse the importance of an effective opening include. An effective opening should introduce the main characters, set the scene of the film including time period and location and should encourage us to watch the rest of the film. The film starts with the Universal logo in a sepia colour. This is clever because the sepia colour is already showing us that this film is set in the past, as this was the colour of old photographs and ink. The same technique is then used with the DreamWorks logo. Slow music starts, with a sepia coloured background, and we are then shown some text which introduces us to the story so far and sets the scene. The first images of the film that are seen are of a hand brushing through a field of wheat. The camera is using an extreme close up on the hand, so that it fills the shot. ...read more.

The enemy soldier then just throws the head into the mud, showing complete disrespect for the Roman army and is issuing a challenge. The Roman army are clearly wound up and are ready to fight. The enemy army start chanting and cheering when the head hits the floor. We now see a dog on the Roman army side and Gladiator stares the dog in the eye. I think that the dog is a signifier, possibly of the brute force of Gladiator and wild side. Galdiator mounts his horse and the dog runs with him, whilst the music quickens. It is still a non-diagetic drum beat. The music is cleverly used in this scene, because as we become ever closer to the fight beginning, the music increases pace increasing our tension and excitement. The armies now begin preparing for war. Galdiator gives a courageous and inspiring speech to a group of knights, which shows us that this fight is important. The armies are still quickly loading their weapons and preparing for the battle. ...read more.

Gladiator rises to his feet wounded and tired. Around him are hundreds of dead bodies from both armies. Gladiator lets out a battle cheer and the remaining Roman soldiers cheer with him. The final shot of the opening shows us the Powerful old man again. The camera zooms in on his face showing a close up shot of his expressions. This is where the scene ends. The scene ends effectively just showing us that mans face, because it leaves us with a cliff hanger. It makes us want to watch the rest of the film to find out who the old man is, and what Gladiator will do next. My opinion I think the first ten minutes of the film Gladiator are superb. We are introduced to some of the main characters and their personalities, and the time period is effectively set . The way the opening ends on a cliff hanger generates interest in watching the rest of the film so that we can understand who the enemy are, why the battle took place and the rest of the story of Gladiator! For these reasons I feel that the opening of the film Gladiator is very effective. By David Williams ...read more.