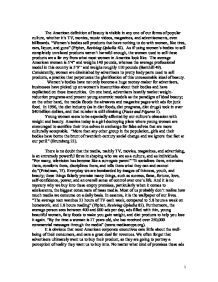 Media influence on the female form.

The American definition of beauty is visible in any one of our forms of popular culture, whether it's TV, movies, music videos, magazines, and advertisements, even billboards. "Women's bodies sell products that have nothing to do with women, like tires, cars, liquor, and guns" (Pipher, Reviving Ophelia 42). As if using women's bodies to sell completely unrelated products weren't harmful enough, the women used to sell these products are a far cry from what most women in America look like. The average American woman is 5'4" and weighs 140 pounds, whereas the average professional model in this country is 5'9'' and weighs roughly 110 pounds (Barnhill 49). Consistently, women are diminished by advertisers to pretty body parts used to sell products, a practice that perpetuates the glorification of this unreasonable ideal of beauty. Women's bodies have not only become a huge money-maker for advertisers, businesses have picked up on women's insecurities about their bodies and have capilatized on these insecurities. On one hand, advertisers heavily market weight-reduction programs and present young anorexic models as the paradigm of ideal beauty; on the other hand, the media floods the airwaves and magazine pages with ads for junk food. In 1996, the diet industry (as in diet foods, diet programs, diet drugs) took in over $40 billion dollars, and that number is still climbing (Facts and Figures 1). ...read more.

Today's teens aged 11-17 are a huge money making resource for businesses and advertisers. The media's goal for adolescents is to seduce and lure them to spend money, while the goal of parents is to raise happy, well-adjusted, mature, responsible young adults. These goals are conflicting, and more than likely, the goals of the media have a better chance of coming out victorious. Unfortunately, parents are not the primary influence on teenage girls; friends and ideas from pop culture and the mass media are much stronger influences on the average adolescent. The media communicates that adulthood implies drinking, spending money, and being sexually active (Reviving Ophelia 82). "Girls are caught in the crossfire of our culture's mixed sexual messages. Sex is considered both a sacred act between two people united by God and the best way to sell suntan lotion" (73). This environment of slick images and quick seductions shapes their desires, and their sense of self, even if they try to resist (Brumberg 209). Our media does very little to portray the realities of adulthood that adolescents should be learning about, such as responsibility, juggling a family and a career, raising children, health issues, dealing with loss and failure, and keeping a marriage working. This has more to do with the everyday life of an American adult. The debate between those that believe that media plays a significant role in the development of eating disorders and those that don't is a heated battle in which we will probably never know the true answer. ...read more.

In only four years, American television is changing the ideal of beauty in Fiji, as well as other countries, to resemble our own impossible ideals, and it is doing so at the cost of young women everywhere. It is important that we recognize and are aware of the underlying power the media has over all of us. Young girls are particularly susceptible, and advertisers know it, which is hwy teenage girls are such an important target market. Chances are they will not recognize these negative affects the media is having on them, so it is important that adults point it our for them. "Given what we know about the deep commercial investment in girls' bodies, and also the tenor of our contemporary culture, it seems unrealistic to think that young girls can operate independently, without parental or adult assistance, or that they should be expected to (Brumberg 209). As with many things parents harp on their daughters about, it may not seem like they are listening, but usually they are. If someone plants the seed in their heads that they don't have to buy into this unrealistic image of beauty, that they are worth so much more than a pretty face, they are valued for their ideas, and loved for who they are, the seed may flourish. If we can find a way for girls to understand the effects our culture is having on their lives, they can and will fight back. 1 ...read more.