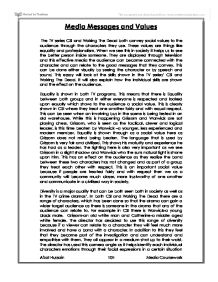 Media Messages and Values The TV series CSI and Waking The Dead both convey social values to the audience through the characters they use. These values are things like equality and professionalism. When we see this in society it helps us to see the better person inside someone. They are displayed through television and this effective media the audience can become connected with the character and can relate to the good messages that they convey. This can be done either visually by seeing the character or by speech and sound. This essay will look at the skills shown in the TV series' CSI and Waking The Dead. It will also explain how the individual skills are shown and the effect on the audience. Equality is shown in both TV programs. This means that there is Equality between both groups and in either everyone is respected and looked upon equally which shows to the audience a social value. This is clearly shown in CSI where they treat one another fairly and with equal respect. This can be seen when an involving bus in the scene is being tested in an old warehouse. While this is happening Grissom and Warwick are sat playing chess. ...read more.

This shot clearly defines all of his facial expressions and his emotions to the audience. This has an effect on them as they now have an opinion of Greg and how he is important within the group. Grissom then tells Greg that he should be wearing gloves. This line of speech shows that Grissom wants his team to be professional and does not want his good reputation to be destroyed by a silly mistake by an inexperienced group member. This quality is also represented in Waking the Dead. We see this when a close up shot has been used on the clothes of the detective as they search along the wall fro more evidence. This has an eerie effect on the audience because it represents that something out of the expected is to happen. But it also shows a sense of professionalism as he was organised and prepared. The message is conveyed towards the target audience as it is seen that both characters find it to be standard practice to wear gloves when dealing with any scenes that require their expertise. This has an effect on the audience as they will believe that the characters are honest, hard working people fighting their best to find out the truth of the scene and the correct order of events. ...read more.

This is a very poor social value because in society this will mean crisis. In society nothing is lead by a one man show and all requires teamwork for an end result. In Waking The Dead this is what is lacking and therefore the group find it difficult to solve the case. Social values can be expressed to the audience through their use of different characters. IN CSI we see the qualities expressed through the characters and the way they communicate and act with others. Skills such as teamwork can be easily identified by the audience, which they can understand and imagine in society. Many skills do not apply in crime dramas and Waking the Dead is a clear example. Waking the Dead has a different basis compared to CSI. IN CSI the characters have a much stronger social bond, which helps them have a skill, which will always help them achieve the best for the team and themselves. Comparing the two dramas, CSI will have a much bigger impact on the audience as it is much more conventional and it has followed many of the skills, which any audience would expect to see in society. CSI definitely is capable of portraying all of the social values explored and therefore will appeal much more to any audience. ?? ?? ?? ?? Afzal Hussain 10E Media Coursework ...read more.