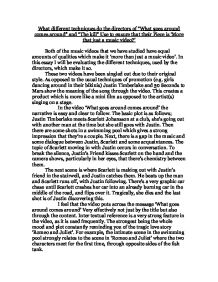 What different techniques do the directors of "What goes around comes around" and "The kill" Use to ensure that their Piece is 'More that just a music video?' Both of the music videos that we have studied have equal amounts of qualities which make it 'more than just a music video'. In this essay I will be evaluating the different techniques, used by the directors, which make it so. These two videos have been singled out due to their original style. As opposed to the usual techniques of promotion (e.g. girls dancing around in their bikinis) Justin Timberlake and 30 Seconds to Mars show the meaning of the song through the video. This creates a product which is more like a mini film as opposed to the artist(s) singing on a stage. In the video 'What goes around comes around' the narrative is easy and clear to follow. The basic plot is as follows; Justin Timberlake meets Scarlett Johansson at a club, she's going out with another man at the time but she still goes with Justin. Then there are some shots in a swimming pool which gives a strong impression that they're a couple. ...read more.

In the video 'The Kill', it uses very different techniques, which coincidently, creates a different effect to 'what goes around comes around' The narrative for 'The Kill' is definitely not as clear as Justin Timberlake, because there isn't a true plot but it follows the story of the well known thriller 'The Shining'. It starts with the band '30 Seconds to Mars' driving to a hotel, which is the same one used as the setting on 'The Shining' The band say clearly state that they're going to stay there for three days, and use it as an opportunity to relax. They enter the hotel and where their keys are ready for them to collect, there's also a note which warns them to stay out of room 6277. They just shrugged this off and didn't class it as anything really important, and all proceeded up to their separate rooms Next some text flashes up on the screen reading '1 week later' which is more than the time allocated at the beginning. Then there are a few separate shots of members of the band on skateboards, exploring the hotel. ...read more.

one week later and the end). In conclusion, I would say that 'The Kill' video is the most successful in the terms of being 'more than just a music video' because it fulfils more of than techniques and effects studied than 'what goes around comes around'. Even though 'what goes around comes around' has a clearer narrative, 'The Kill' is more likely to get the viewers interested because it's so closely related to 'The Shining' The location for 'The Kill' is also more interesting because it's the setting for a horror movie; you're not sure what else they're going to show from the film. Whereas the location for Justin Timberlake is very appropriate for the genre of music and for the theme of the song, it didn't have the same amount of intrigue for me. The special effects were equally good for both I thought, as the car crash at the end of Justin Timberlake was extremely realistic and both the ghosts and the subliminal images in 'The Kill' were effective too. However, I do think that '30 Seconds to Mars' produced the most entertaining, interesting video out of the two due to its innovative and different perspective. Pippa Wall 10DPA ...read more.