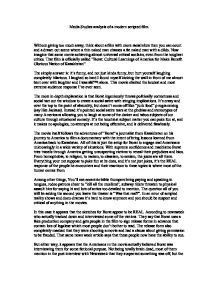 Media Studies analysis of a modern scripted film. Without giving too much away, think about a film with more racial slurs then you can count and a drawn out scene where a thin naked man chasses a fat naked man with a dildo. Now imagine that same movie achieving almost universal critical acclaim, even from the toughest critics. That film is officially called "Borat: Cultural Learnings of America for Make Benefit Glorious Nation of Kazakhstan" The simply answer is: it's funny, and not just kinda funny, but hurt yourself laughing completely hilarious. I laughed so hard I found myself kicking the wall in front of me almost bent over with laughter and I wasn�(tm)t alone. This movie elicited the loudest and most extreme audience response I've ever seen. The more in-depth explanation is that Borat ingeniously throws politically correctness and social tact out the window to create a social satire with stinging implications. It's crazy and over the top to the point of absurdity, but doesn't come off like "junk food" programming (say like Jackass). ...read more.

Among other things, You'll see eccentric bible thumpers bring paying and speaking in tongues, rodeo patrons cheer to "kill all the muslims", subway riders threaten to physical assault him for saying hi and lots of antics too detailed to mention. The question all of you will be asking the second you leave the theater is "Was that real?". In an error of scripted reality shows and docu-dramas it's hard to know anymore and you should be suspect and critical of anything in the movies. In this case it appears that the sketches for Borat appear to be REAL. According to newsweek who actually tracked down and interviewed some of the victims. They say that Borat uses a fake production company and gets people in the film to sign release forms in advance that contain lots of legalese which most people don't bother to read. The release form also completely masked that they were shooting a movie and had a clause about giving permission to be frauded. That same news week article says that these people now have the ability to sue. ...read more.

It's not just teasing and mocking people pointlessly, At times American culture seems to embrace the idea of a politically correct, stereotype free world, where you try as hard as possible not to offend the greatest number of people, where certain topics are off limits or have to be toned down. Where television problems have to stay within correct norms for fear of selling less soap commercials. Everyone knows what topics you're not suppose to discuss at dinner parties, or in public, because they're not appropriate to say. Most of our traditions have inherent race, religion or sexism behind them, but this is rarely discussed outright. Borat spits in the face of politically correctness and uses comedy to put the negative aspects of American society on the screen for all to see. It hits you in the face with the bios and bigotry that many Americans have, but is rarely seen in film (apart from super villains) and it's a welcomed, relief. Amy Biancolli from the Houston Chronicle summed it up nicely with "Expect to laugh uproariously; expect to choke back horror and revulsion, often at yourself." ...read more.