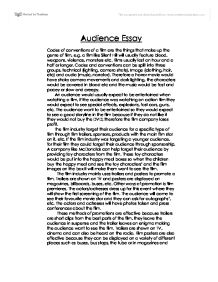 Audience Essay Codes of conventions of a film are the things that make up the genre of film, e.g. a film like Silent Hill will usually feature blood, weapons, violence, monsters etc. Films usually last an hour and a half or longer. Codes and conventions can be split into three groups, technical (lighting, camera shots), Image (clothing, hair, etc) and audio (music, narrator). Therefore a horror movie would have shaky camera movements and dark lighting, the characters would be covered in blood etc and the music would be fast and pacey or slow and creepy. An audience would usually expect to be entertained when watching a film, if the audience was watching an action film they would expect to see special effects, explosions, fast cars, guns, etc. ...read more.

Trailers are shown on TV and posters are displayed on magazines, billboards, buses, etc. Other ways of promotion is film premieres. The actors/actresses dress up for this event where they will show the first screening of the film. The audience will come to see their favourite movie star and they can ask for autographs', etc. The actors and actresses will have photos taken and press conferences about the film. These methods of promotions are effective because trailers are short clips from the best parts of the film, they leave the audience in suspense and the trailer leaves an enigma making the audience want to see the film. Trailers are shown on TV, cinema and can also be heard on the radio. ...read more.

The audience who attended the premiere would want to see the film even more after just meeting the movie star and because their favourite actor or actress is in it. I think the best method for promoting a film to an audience is trailers because they leave the audience in suspense wanting to see more. They are shown most of the time on TV and many people in the UK own a TV and spend most of the day in front of it. As for film posters not everyone takes public transport except mostly business people so they would not have enough time to look at the poster as they are rushing to get to work, also not everyone reads the newspaper or magazines so the posters would not attract the audience much. Film premieres are usually crowded therefore people will not attend. ...read more.