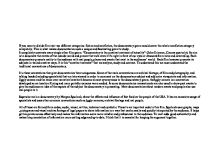 If you were to divide film into two different categories: fiction and non-fiction, the documentary genre would cover the whole non-fiction category completely. This is what makes documentaries such a unique and fascinating genre to study. It completely contrasts every single other film genre. "Documentary is the creative treatment of actuality"- (John Grierson, Cinema quarterly). Its aim is to document the events of the outside world and present the truth even if it's right in front of our eyes or obscured from view and covered up. Each documentary presents reality to the audience with real people, places and events that exist in the audiences' world. Each film however presents its subjects in varied creative ways. It is this "creative treatment" that we analyze, study and contrast. To understand this we must understand the traditional conventions of documentary. It is these conventions that give documentaries there uniqueness. Some of the main conventions are archival footage, of film and photography, and talking heads (including specialists) that are interviewed in order to comment on the documentary subject and add extra viewpoints and information. Jiggly camera and the voice over narrative have both become almost synonymous to the documentary genre; the Jiggly camera is a convention developed as on-location filming and more portable cameras were needed. ...read more.

He is addressing a current ongoing issue rather than a past event such as with Broomfield's investigation. Also, as a result of it being about an ongoing issue in people's lives, people feel that they must involve themselves in the documentary and keep watching; holding their attention. Broomfield's film is Biggie and Tupac and is about the deaths of Biggie Smalls and Tupac Shakur. Broomfield is trying to find out why they were killed and is investigating a hunch that the murders were related to the feud between the east and west coasts; Death Row and Bad Boy records. These films use different styles with both similarities and differences (they use the same codes except symbolic which Broomfield doesn't use). Biggie and Tupac doesn't rely much on visual effects such as CGI graphs and charts like Spurlock does; He relies on more archive footage in the form of videos and photographs that may have even been taken by amateur cameramen and photographers. This adds more realism to the documentary as it isn't something they have just made up like a graph or pictogram and makes the audience feel more engaged and keeps them interested especially as these films are not professionally done by actors and so anything could happen in it without being affected by the film makers. ...read more.

Both documentaries are very similar in the traditional codes and conventions used but these are used in different ways. Spurlock uses humour to engage the audience while Broomfield uses music. Broomfield relies on archival film footage while Spurlock uses pictures and charts designed by a group of people who helped make the film. Broomfield doesn't use Specialists but Spurlock does. It goes on but despite these, both films use technical, audio, visual and at least some written codes (though Broomfield uses no symbolic codes). They use the same conventions; voice-overs, archival footage, talking heads, jiggly camera etc but the differing styles affect the way that these are used with Broomfield's crime investigation style offering a less biased argument but more bias from the opinions of the people he interviews and less visual affects like bars and graphs to relay information about a serious issue/event. Spurlocks style offered more specialist talking heads, CGI visual effects and a biased argument to try and invoke us to turn against fast food. Both styles used their conventions well and were good in their own ways; Spurlock provided a good argument (like a prosecution case in court) and used his visual codes, specialists and unusual Mcdiet to back it up with good evidence. Broomfield on the other hand provided a quicker paced "whodunit" investigation and used his talking heads, music and archival footage aswell as technical codes to great effect. Both documentaries show 2 very different but very effective ways of documenting . ...read more.