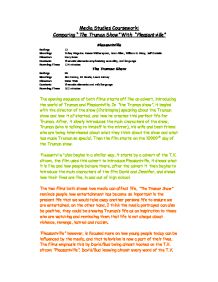 Media Studies Coursework: Comparing "The Truman Show" With "Pleasantville" Pleasantville Rating: 12 Starring: Tobey Maguire. Reese Witherspoon, Joan Allen, William H. Macy, Jeff Daniels Director: Gary Ross Content: Thematic elements emphasizing sexuality, and language Running Time: 124 minutes The Truman Show Rating: PG Starring: Jim Carrey, Ed Harris, Laura Linney Director: Peter Weir Content: Thematic elements and mild language Running Time: 102 minutes The opening sequence of both films starts off like an advert, introducing the world of Truman and Pleasantville. In "the Truman show", it begins with the director of the show (Christophe) speaking about the Truman show and how it all started, and how he created this perfect life for Truman. After, it slowly introduces the main characters of the show, Truman (who is talking to himself in the mirror), his wife and best friend who are being interviewed about what they think about the show and what has made Truman so special. Then the film starts on the 10909th day of the Truman show. "Pleasantville" also begins in a similar way, it starts by a advert of the T.V. sitcom, the film uses this advert to introduce Pleasantville, it shows what it is like and how people behave there, after the advert it then begins to introduce the main characters of the film David and Jennifer, and shows how their lives are like, in and out of high school. ...read more.

But also realises that all he lived for was all fake, Both "The Truman Show" and "Pleasantville" are very similar in theme. People trapped inside television show, and life is a routine and they can expect what will happen the following day. Both films share, the God-like characters that control the events of each story. In "Pleasantville", a mysterious TV Repairman first introduces the two main characters of the movie David and Jen to this special remote control, which zaps them to the black-and-white town-Pleasantville. Meanwhile, the TV Producer Christof in "The Truman show" commands the environment around the controls Truman's life unknowingly in the make believe world that is "The Truman Show". These two films also have differences; the main difference between the two is the moral. The moral of "The Truman Show" is this: "You can't cage the human spirit." Any attempt to control it and show it onto television for the public will fail. "Pleasantville's" moral is slightly different: "You don't have the right to hold back human happiness." Any attempt to control the way a person wants to be, will cause aggression and hatred, but however, you may finally end up accepting the difference. The focus is different too. In Truman, the watchers and makers of the TV show in the film are focused entirely on one man. ...read more.

The lack of depth of all the other characters besides Truman is also a bit disconcerting: Christof and the media are collectively faceless and evil, and the audiences that raise The Truman Show to a powerful ratings grabber are depicted as mindless sheep. The young woman who falls for Truman and can't keep her mouth shut about the conspiracy comes off as the token love interest required in a Hollywood film of this size. Unfortunately, her presence and assistance only serve to weaken Truman's ability to unravel the mystery for himself. Had Truman stumbled through the maze on his own in cold isolation, his discovery might have come as a more powerful revelation about the state of reality. The one failing of Pleasantville is its tendency to be a bit heavy-handed with its message - but then again, it is a fairytale. Who criticizes Mother Goose and the Brothers Grimm for waving their messages around (do what your parents tell you, be good, and watch out for trolls)? Pleasantville asks us to suspend our disbelief and enter into its world, where life is magical and anything can happen. David (Tobey Maguire), a whey-faced teenager with no discernible social life, a sister who'd rather he didn't exist, and a divorced mother who can barely hold herself together. David is the master of Pleasantville trivia, and as the movie begins, he's gearing up for the 24-hour Pleasantville marathon, which to him is something like a dream come true. ...read more.