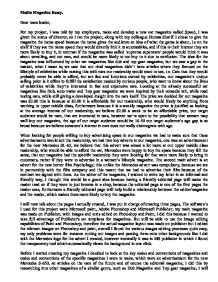 Media Magazine Essay. Dear team leader, For my project, I was told by my employers, make and develop a new car magazine called Speed, I was given the status of director, so I ran the project, along with my colleague Humza Sharif. I chose to give the magazine the name speed because the name gives the audience an idea of what the game is about, i.e on the shelf if they see the name speed they would directly link it to automobiles, and if this is their interest they are more likely to buy it, in contrast if the magazine was called 'supreme superstars' people would think it was about wrestling, and not cars, and would be more likely to not buy to it due to confusion. The idea for the magazine was influenced by other car magazines like dub and top gear magazine, but we saw a gap in the market, what I mean is; we saw that our rival magazines didn't have articles where they focused on the lifestyle of celebrities while mixing this with cars our readership would want to see, i.e. Cars that they would probably never be able to afford, but are fast and luxurious owned by celebrities, our magazine's unique selling point is it offers to fulfill the satisfaction needed by curious people, who want to know about the lives of celebrities while they're interested in fast and expensive cars. Looking at the already successful car magazines like Dub, auto-trader and Top gear magazine we were inspired by their comedic wit, while road testing cars, while still giving a developed insight into the cars itself. The price we decided for out magazine was �2.00 this is because at �2.00 it is affordable for our readership, who would likely be anything from working to upper middle class, furthermore because it is a weekly magazine the price is justified as looking at the average income of our readership, we believe �2.00 a week to be an affordable price, our ...read more.

The last image on the panel is the Mercedes Benz logo, and name, I added this as a gentle reminder to the audiecne of the car make, in addition I've only placed 5 images on the panel as too many would clutter up the simplistic look I've gone for, and furthermore I placed text at the top to avoid cluttering up the main image, however I did add 'Coming soon' to the bottom left of the main picture because if I had put this text on the top it would clash with the 'Luxury defined' slogan. The second page in the magazine I made was the article on 'Design concepts of the future' this was actually a feature article listed on the contents page, so therefore had to look really good as it would be the one read the most. I first decided to again study the key codes and conventions of magazines, but this time I focused more on actual articles, when I started designing the actual article page, I first placed a masthead or heading right at the top of the page, because this would be the name of the article, I named the article 'Streets ahead' I thought this was a rather clever play on words, incorporating the popular car phrase, but manipulating it within the criteria of the article so it actually made sense, this masthead implies that the cars are 'streets ahead' not only in terms of speed but design wise too. I also added a subheading, just in case people didn't understand what the article was about from reading the masthead, the subheading said: "Design concepts of the future" Regarding the actual content of the actual article, I wanted to make sure it was a friendly and encaging as possible so I included some jokes like "This is a car I really wouldn't mind living in, lets hope they actually make this one, so I can sell my house and start packing." ...read more.

We are also planning to use the word of mouth technique of advertising, using posters and billboards, we plan to hide cryptic messages giving the audience clues to when the magazine will be released, what's in the next issue etc, by hiring people to go onto sites like car forums to hype up the magazine, and hype up these clues, this will result in more people becoming interested in the magazine. More over, we also plan to advertise on all our locations, the chance to win free prizes, we have thought out these prizes to be relevant to our readership for example we plan to give away 1 years free petrol, we feel this is a good prize to advertise as our readership are likely to have cars, and with the current financial climate they won't have too much money to spend, also not to mention the rising cost of fuel anyway. And as a special prize we plan to advertise in train stations only, is a free all day train ticket for the first 100 reader, this will encourage people to buy the magazine, and is relevant to the location. To conclude, I am very happy with this project I've completed with Humza Sharif, I feel I have learnt a lot while designing my pages, for example how to use the lasso tool in photoshop, and how to use different textures, and in Publisher I've learnt how to use the transparency tool, and how to crop, and re-colour images. This project has changed the way I buy and read magazines as I now understand how companies make me spend money, therefore I am less impartial to spending so much money on magazines, and I will always make sure I browse the magazine first, and not judge by the cover, as there could be more articles that I may reject rather than more articles that I accept. Ameer Patel. *This isn't actually true miss! XD ...read more.