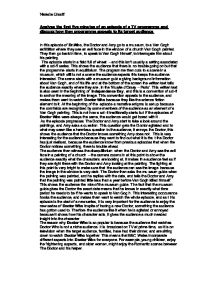 Media Studies - Textual Analysis of Dr Who. In this episode of Dr.Who, the Doctor and Amy go to a museum, to a Van Gogh exhibition where they see an evil face in the window of a church Van Gogh painted.

Analyse the first five minutes of an episode of a TV programme and discuss how they programme appeals to its target audience In this episode of Dr.Who, the Doctor and Amy go to a museum, to a Van Gogh exhibition where they see an evil face in the window of a church Van Gogh painted. They then go back in time, to speak to Van Gogh himself, to interrogate him about his painting. The episode starts in a field full of wheat - and this isn't usually a setting associated with a sci-fi series. This shows the audience that there is no trouble going on but that the programme starts in equilibrium. The programme then cuts to a scene in a museum, which still is not a scene the audience expects this keeps the audience interested. The scene starts with a museum guide giving background information about Van Gogh, and of his life and at the bottom of the screen the written text tells the audience exactly where they are, in the 'Mus�e d'Orsay - Paris'. This written text is also seen in the beginning of Independence Day, and this is a convention of sci-fi to anchor the meaning of the image. ...read more.

This shows the audience the role of the museum guide. The fact that the museum guide gives the Doctor the exact date means that he knows in exactly what time period he needs to be if he wants to speak to Van Gogh. This interesting occourance hooks the audience, and makes them want to watch the whole episode, and as this episode is the start of a new series, it is very important for the audience to enjoy the new series of Doctor Who inspite of having a new Doctor, something the audience has gotton used to. Therfore the audience like it when he is agitated or annoyed because it shows how his character acts, it gives the audience a much needed insight into the character. The reason why Doctor Who is so popular is because the audience that watches Doctor Who is not a niche audience. It is broadcast on TV at prime time, so it is on television when the target audience, families, have had their dinner, and are sitting down to watch Doctor Who together. This means that BBC Wales incorparate different aspects into Doctor Who for everyone. ...read more.

They are 'nerd-like'. In Doctor Who, the Doctor wears a classic suit, a trench coat, and converse. - This is what the audience expect the Doctor to wear because he has always worn this, even when there were other Doctors they also used to wear this composition of clothing. David, in Independence Day, tries to be more 'with it' and he fails - he wears a vest top, jeans, and some sort of dog chain that people wear as a fashionable item. Probably to impress the woman he loves. Then you have, Dr. Isaacs, who is killed very early on in Independence Day, wears very high trousers, a shirt and a white coat. Not to mention that he has thick rimmed glasses. This is a 'mad scientist' to the extreme. The costume designers in Independence Day have over exaggerated the way that Dr. Isaacs dresses, because the way he dresses is a definite convention of Sci-Fi. The hero is also a character in Sci-Fi. In Independence Day, the role of the hero is shared between Jasmine, Steve, David, and the President. In Doctor who, the hero is always consistent - The Doctor, and this is another reason why the audience enjoy Doctor Who because, one fo the reasons why people watch Television is familiarity. ?? ?? ?? ?? Natasha Greeff ...read more.