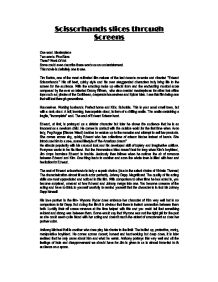 Scissorhands slices through Screens One word. Masterpiece Two words. Five Stars Three? Work Of Art. Some could even describe these words as an understatement. This movie is definitely one to see. Tim Burton, one of the most cultivated film makers of the last decade co-wrote and directed ''Edward Scissorhands.'' His off beat, quirky style and his over exaggerated characters truly bring life to the screen for the audience. With the amazing make up effects from and the enchanting musical score composed by the ever so talented Danny Elfman, who also created masterpieces for other box office tops such as; pirates of the Caribbean, desperate housewives and Spider Man. I see this film being one that will last through generations. Housewives. Working husbands. Perfect home and Kids. Suburbia. This is your usual small town, but with a dark cloud. A tall, looming, inescapable cloud, in form of a chilling castle. ...read more.

[due to the select choice of Victoria Thomas] The characterization almost fit each actor perfectly. Johnny Depp. Magnificent. The quality of his acting skills are most appreciated and noticed in this film. With comparison to other films he has acted in, you become surprised, amazed at how Edward and Johnny merge into one. You become unaware of the acting and have to think to yourself carefully to remind yourself that the character is in fact Mr Johnny Depp himself. His love partner in the film- Wynona Ryder does embrace her character of Kim very well but is no comparison to Mr Depp. But during the film it is obvious that there is instant connection between them both. Luckily their off scene romance at the time helped with this and you could tell that something evident and strong was between them. Some would say that Wynona was not the right girl for the part as she could seem quite bland with her acting and doesn't reach the extent of amazement as does her partner actor. ...read more.

As Edward does not express a lot through his speech, close ups were used to show what he felt and wanted to say though his facial expressions. The audience really connect with Edwards emotions through this way. Every shot and angle in this film though is used very effectively and helped the film that little bit more in telling its tale. Like in the beginning, the bird's eye view of the town and the mansion give us the looming effect of the castle as well as the audience becoming familiar with the area. In conclusion, this modern day fairytale is definitely one to see and pity it is on those who do not experience this wonderful movie extravagance. Every little detail of this film, from the cast to the make up to the music and most importantly the story itself is almost too good to be believed. Each character in this film is acted with an evident 'degree of immense intensity' and brings the story to the point of true life and reality. Tim Burton made a true classic with this and shall obviously not be forgotten. ...read more.