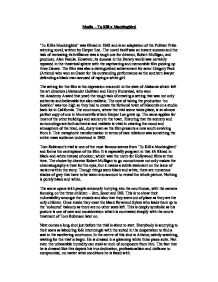 Media - To Kill a Mockingbird 'To Kill a Mockingbird' was filmed in 1962 and is an adaptation of the Pulitzer Prize winning novel, written by Harper Lee. The novel itself was an instant success and the task of recreating its brilliance was a tough one for director, Robert Mulligan, and producer, Alan Pakula. However, its success in the literary world was certainly repeated in the theatrical sphere with the captivating and memorable film picking up three Oscars. The film was also a distinguished achievement for actor Gregory Peck (Atticus) who won an Oscar for his outstanding performance as the southern lawyer defending a black man accused of raping a white girl. The setting for the film is the depression era south in the state of Alabama which left the art directors (Alexander Golitzen and Henry Bumstead, who won the Academy Award that year) the tough task of creating a setting that was not only authentic and believable but also realistic. The cost of taking the production 'on location' was too high so they had to create the fictional town of Macomb on a studio back lot in California. The courtroom, where the trial scene takes place, is an almost perfect copy of one in Monroeville where Harper Lee grew up. ...read more.

He is dressed in a gleaming white three piece suite. Not even the unbearable humidity can steal an inch of composure from him. The fact that he is dressed like this depicts his true dedication, professionalism and defiance to compromise, no matter what conditions he is faced with. The next shot pans the scene and is then followed by a close up of the black congregation in the gallery. This close up shot suggests intimacy between them despite the stark and deliberate contrast between the black adults and three white children. It is made obvious they are at ease amongst each other and the way they interact suggests warmth between them. Immediately after this we see Tom Robinson being led to his seat. The backs of the jury are evident here to give the impression of his vulnerability under their intense scrutiny. He has been chained and looks bemused and bewildered. Following this is an over the shoulder shot of the black gallery above Atticus and Tom. This is significant as it shows the black gallery are clearly focused on Atticus - he is their representative, their only hope. Many of the camera angles used for Atticus are low angle shots. ...read more.

Her voice is timid and she appears almost too fragile and scared that she can hardly manage to speak. This whole image reflects a very feminine and innocent character, not the well-built, self-sufficient woman who is responsible for most of the labouring work at her home. That the trial scene creates such an atmosphere is testimony to the director's skill, because there is no real suspense; even Atticus knows it is a foregone conclusion yet he still listens attentively, an air of incredulity about him. No matter what evidence is presented at the trial, the racist jury would never, under any circumstances, acquit a black man accused of raping a white woman. The reader knows that Tom Robinson will be found guilty, so Mulligan locates the tension and suspense elsewhere - in Atticus' slow but steady dismantling of the prosecution's case. Jem, still clinging to his youthful illusions about life working according to concepts of fairness, doesn't understand that his father's brilliant efforts will be in vain. He believes that the irrefutable implications of the evidence will clinch the case for Atticus. When Jem says, "We've got him," after Bob Ewell is shown to be left-handed, the viewer knows better. Yet despite this the viewer still eagerly anticipates the upcoming verdict and the profound effects it will have on everyone in the courtroom. ...read more.