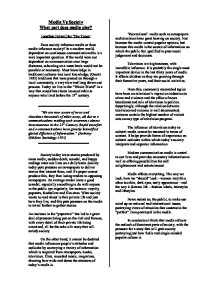 Media Vs Society - What part does media play

Media Vs Society What part does media play? Jonathan Fulwell for 'The Times' Does society influence media or does media influence society? In a modern world, dependent on continuous communication this is a very important question. If the world were not dependent on communication over large distances, schooling on a mass basis would not be possible or necessary. Most knowledge in traditional cultures was local knowledge, (Geertz 1983) traditions that were passed on through a local community, a very slow and long drawn out process. Today we live in the "Whole World" in a way that would have been inconceivable to anyone who lived before the 19th century. ...read more.

An increase in the "paparazzi" has led to a great deal of pressure being put on the rich and famous, with every detail of their private life being examined, all for the sake of a story that will satisfy society. On the other hand, it cannot be doubted that media influences people's attitudes and outlooks by conveying a variety of information which is acquired from newspapers, books, television, films, recorded music, magazines, showing how wide and dense the structure of today's media is. 'Recreational' media such as newspapers and television have great bearing on society. Not because the media control popular opinion, but because this media is the source of information on which the public feel qualified to pass moral judgement and decisions. ...read more.

It helps provide forms of experience on cultural outlooks within which today's society interprets and organise information. Modern communication media is central to our lives and provides necessary information as well as offering possibilities for self-enlightenment and entertainment. Media affects everything. The way we look, how we "should" look - women very thin, often too thin, dark eyes, surly appearance - and the way it dictates life - fashion labels, hairstyles and lifestyles. News assists us, the public, to make our mind up on national and international issues, portraying views of atrocities that contrast to the "perfect" lives portrayed in the media. In conclusion I think that media reflects the outlook of dominant parts of society, with the pressure for a story that will grab society portraying just how fickle and single-minded popular culture is. ...read more.