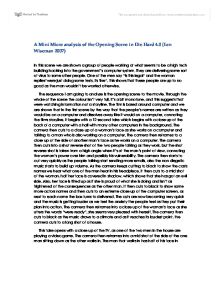 A Mini Micro analysis of the Opening Scene in Die Hard 4.0 (Len Wiseman 2007) In this scene we are shown a group of people working at what seems to be a high tech building hacking into the government's computer system. They are delivering some sort of virus to some other people. One of the men say "is this legal" and the woman replies"were just doing some tests, its fine", this shows that these people are up to no good as the man wouldn't be worried otherwise. The sequence i am going to analyse is the opening scene to the movie. Through the whole of the scene the colour isn't very full, it's a bit monotone, and this suggests that were watching information not a storyline. The film is based around computer and we are shown that in the first scene by the way that the people's names are written as they would be on a computer and dissolves away like it would on a computer, connoting the films storyline. ...read more.

As the camera keeps cutting to black to show the casts names we hear what one of the men hear in his headpiece. It then cuts to a mid shot of the woman, half her face is covered in shadow, which shows that she has got an evil side. Also, her face is tilted up as if she is proud of what she is doing and isn't as frightened of the consequences as the other man. It then cuts to black to show some more actors names and then cuts to an extreme close up of the computer screen, as next to each name the box turns to delivered. The cuts are now becoming very quick and the music is getting louder as we feel the anxiety the people feel as they put their plan into action. The camera then reframes into a close up of the woman's face as she utters the words "were ready", she seems very pleased with herself. ...read more.

The camera reframes to a close up of the other man with this man on the computer in the background, suggesting that the man on the video game is in power, but our main focus is on the other man suggesting that he could be quite important. The cuts now become quicker again and the man on the computer becomes agitated, he thinks someone messed with his computer, it could be the email that woman was sending out, the virus inside of it could've spread to his computer. As he says "never, ever touch my computer" The camera zooms into the keyboard as he hits the delete button then very quickly cuts to the back of his computer as a red light on the back goes green, the camera does another quick cut to a long shot of the house again as it explodes and a black van drives away. By Sam Morris ...read more.