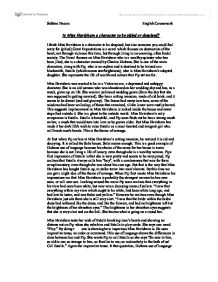 Is Miss Havisham a character to be pitied or despised? I think Miss Havisham is a character to be despised, but also someone you could feel sorry for (pitied).Great Expectations is a novel which focuses on destruction of the heart; not through violence this time, but through living in an uncaring, often brutal society. The Novel focuses on Miss Havisham who is a wealthy spinster who has been jilted, she is a character created by Charles Dickens. She is one of the main characters, along with Pip, who is an orphan and is destined to be trained as a blacksmith, Estella (which means star/brightness), who is Miss Havisham's adopted daughter. She represents the life of wealth and culture that Pip strives for. Miss Havisham was created to be in a Victorian era, a depressed and unhappy character. She is an old woman who was abandoned on her wedding day and has, as a result, given up on life. She wears a yellowed wedding gown (from the day that she was supposed to getting married). She has a rotting mansion, made of old brick, and it seems to be dismal (sad and gloomy). ...read more.

Call Estella." Again the imperative tense. It that quotation, Dickens use of language shows the different views of Pip and Miss Havisham. The brief interchanges between Miss Havisham and Pip when he and Estella are playing shows the way Miss Havisham has bought Estella up and the effect Estella has on men: "What do you think of her?" asks Miss Havisham. "I don't like to say." "Tell me in my ear." "I think she is very proud. "Anything else?" "I think she is very insulting." "Anything else?" "I think I should like to go home." "And never she her again, though she is so pretty?" "I am not sure that I shouldn't like to see her again, but I should like to go home now." These inter changes between Miss Havisham and Pip show that Miss Havisham knows that her wish is coming true. This is the theme of revenge, as Miss Havisham was abandoned on her wedding day, which was also her birthday. So she has bought Estella up in such a way that she would break any men's heart. I think Miss Havisham is to be despised for this because this could also have an effect on Estella, she may fall in love one day, but seen as she is taught to show no emotions this could ruin her life, as well as all the innocent men. ...read more.

Herbert Pocket explained all this to Pip. He also told him that Miss Havisham stopped her clocks at twenty to nine, exactly when her life turned upside down. And since then her house has been a waste, and she has never looked upon the light of day. Herbert also thinks it was planned out with her half brother. "But I have forgotten one thing. It has been supposed that the man to whom she gave her misplaced confidence, acted throughout in concert with her half-brother; that it was a conspiracy between them; and they shared the profit." So there is a maybe bad side of Miss Havisham and we now get an idea that she is to be despised. In conclusion I think Miss Havisham is to be despised for all the men's heart she would have broken through Estella, and also she would have a huge effect on Estella in the future. She would be unable to show any emotion towards men. I also think Miss Havisham is to be pitied because she was abandoned on her wedding day, which was also her birthday, and she hasn't recovered since then, her life is ruined. But revenge is not the answer. She could have gotten through it and started a whole new life. ?? ?? ?? ?? Subhan Naeem English Coursework ...read more.