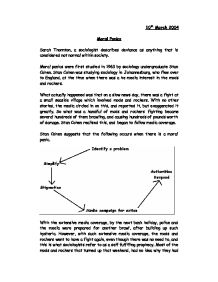 10th March 2004 Moral Panics Sarah Thornton, a sociologist describes deviance as anything that is considered not normal within society. Moral panics were first studied in 1963 by sociology undergraduate Stan Cohen. Stan Cohen was studying sociology in Johannesburg, who flew over to England, at the time when there was a he media interest in the mods and rockers. What actually happened was that on a slow news day, there was a fight at a small seaside village which involved mods and rockers. With no other stories, the media circled in on this, and reported it, but exaggerated it greatly. So what was a handful of mods and rockers fighting became several hundreds of them brawling, and causing hundreds of pounds worth of damage. Stan Cohen realised this, and began to follow media coverage. Stan Cohen suggests that the following occurs when there is a moral panic. With the extensive media coverage, by the next bank holiday, police and the media were prepared for another brawl, after building up such hysteria. However, with such extensive media coverage, the mods and rockers went to have a fight again, even though there was no need to, and this is what sociologists refer to as a self fulfilling prophecy. ...read more.

An example of a more recent moral panic that Sarah Thornton studied was that of the acid house parties in Britain. Sarah Thornton actually arrived to study moral panics, and as she arrived there were newspaper reports that there had been lots of acid house parties happening. Police constables had been hurt, and had retrieved two dustbins full of drugs at one of these parties, and the owners of the parties had been put in jail. The Sun had reported that on the back of an acid house CD that was on the market at that time, which predicted that there would be a moral panic about the music and what people do with it. So in a way, this could be seen as a self fulfilling prophecy. There was very sensational reporting around the topic of acid house music, making people very aware of what apparently went on in these clubs. Firstly, the tabloid newspapers were quite positive of what was going on, with some newspapers even printing what you were meant to wear to go to these clubs, but soon, they began printing negative reports about acid house parties. ...read more.

After a post mortem, it was revealed that Leah had died as a result of taking the tablet, and drinking too much water afterwards. It was a catch 22, as the tablet makes you very thirsty, and so you drink water, but then if you drink too much water, then it could have very severe effects. The judge said that the only person responsible for Leah's tragic death was Leah herself, and that he was very sad that this had happened. Leah, in this case, was used as a folk devil, a term that Stan Cohen had used to describe someone that the media used as a scape goat, really, that the reporting really was a result of her death. Her parents then set out to try and prevent this from happening again, which provided more media coverage. They tried lots of different approaches, and the media exaggerated all of them. The fact remains that the case of Leah Betts, popularised drug taking. Sarah Thornton saw this, through the media making a moral panic about this. The media saw that there was a problem, with drug taking, and simplified the problem, by saying that drugs and acid house were totally to blame for Leah's death, and it was stigmatised, and the media campaigned for action. A typical Moral Panic. ...read more.