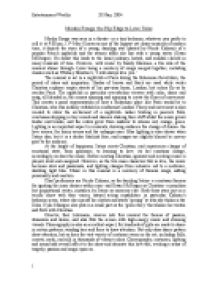 ï»¿Entertainment Weekly 20 May, 2004 Moulin Rouge: the Hip Edge to Love Tales Moulin Rouge was seen in a theatre- or a tiny bedroom; whatever you prefer to call it- at 9:00 pm, 11th May. Known as one of the hippest yet classy musicals of modern time, it depicts the story of a young, dazzling star (played by Nicole Kidman) of a popular French nightclub and the steamy affair she has with a young writer (Ewan McGregor). No doubt this leads to the usual jealousy, hatred, and scandal clichéd in many musicals of time. However, with music by Randy Edelman, a fun side of the musical shines through- lyrics being a mockery of songs merged together, including classics such as Whitney Houston’s, ‘I will always love you.’ The musical is set in a nightclub at Paris during the Bohemian Revolution, the period of ideas and inspiration. ...read more.

Flurry and movement is also created to show the excitement of a nightclub- ladies twirling in peacock frills, courtesans skipping in tiny corsets and dancers shaking their stuff whilst the music grows louder and louder, and the colors grow from rainbow to intense red, orange, green. Lighting is an important aspect in musicals, showing audience the change of drama- the love scenes, the horny scenes and the unhappy ones. Blue lighting is also shown when Satine dies, but it is a darker blackish blue, and images are slightly blurred to convey grief to the audience. At the height of happiness, Satine meets Christian, and experiences change of emotional state- from ignorance, to learning to love. As her emotions change, accordingly, so does the music. ...read more.

Kylie Minogue also puts in a small part as the ?green fairy? that shakes her tootsie and flirts with Christian. Director, Baz Luhrmann, weaves into this musical the themes of passion, obsession and desire, and also fills the screen with high-energy music and stunning visuals. Choreography is also an excellent aspect, for hundreds of girls are made to dance in certain patterns, winding here and there to draw attention. Not only does dance pattern draw attention, but so does the vast variety of costumes worn on the set, including frills, corsets, mesh, and silk in thousands of vibrant colors. Choreography, costumes, lighting and sound add overall affect to the show and decorate this love tale, evoking a sense of tragedy, passion and magic upon us. ...read more.