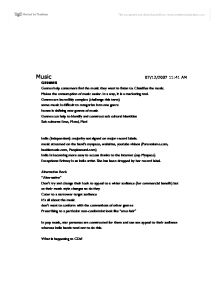 GENRES Genres help consumers find the music they want to listen to. Classifies the music. Makes the consumption of music easier. In a way, it is a marketing tool. Genres are incredibly complex (challenge this term) some music is difficult to categorize into one genre Itunes is defining new genres of music Genres can help to identify and construct sub cultural identities Sub cultures: Emo, Metal, Mod Indie (independent): majority not signed on major record labels. music streamed on the band's myspace, websites, youtube videos (Purevolume.com, baeblemusic.com, Peoplesound.com) Indie is becoming more easy to access thanks to the internet (esp Myspace) Exceptions: Britney is an indie artist. She has been dropped by her record label. Alternative Rock "Alternative" Don't try and change their look to appeal to a wider audience (for commercial benefit) but as their music style changes so do they Cater to a narrower target audience It's all about the music don't want to conform with the conventions of other genres Prescribing to a particular non-conformist look like "emo hair" In pop music, star personas are constructed for them and use sex appeal to their audience whereas indie bands tend not to do this. ...read more.

My chosen institution is Dark Horse comics, famous for releasing such graphic novels as Sin City and300. I have decided to make my comic in the format of a graphic novel so that it is easier to be adapter into TV or movie versions. I have not chosen Marvel as their superheroes are normally mutants, which my character noticeably isn't. I have decided to not only abide by but challenge the standard conventions of a comic book superhero. For instance, NinjaGirl has a secret identity which she hides behind her mask, This is a common trait of most superheroes. Another feature for superheroes is a signature weapon or power. In NinjaGirl's case, she has both. On her right hand she is wielding a samourai sword which is obviously her choice of weapon. But on her right hand, there is a faint glow hinting towards the possibility of a superpower. The extent of her power isn't revealed on the cover so that it creates a sense of enigma and entices a buyer to read to find out. However, NinjaGirl defies some superheroine conventions. Her hair is not long and flowing, but cropped. ...read more.

I have chosen her formany reasons. One of them being, she is BEyonce Knowles's littlesister. Beyonce being a hiphop and rnb icon, the showwill be able to tap into an existing fanbase. Solange also has some background in acting so she is not a new face, and as a C-grade celebrity, the cost of hiring her to hsot a show is affordable and she doesn't have a hectic schduele to keep with making her a suitable choice as a long term host. Solange hasn't had any bad press thus far, so she will not taint the show with her presence. She also exudes a good amount sex appeal which will interest a male audience. The show is similar to the other music programmes on the air. It has a big screen to show music video countdowns, a stage for live performances, a small interviewing section and stands for a live studio audience. The Unique Selling Point of the show is that audiences are able to join the interviewer to ask their most interesting questions for the stars to answer. They are also able to play games with the celebrities. By getting the audience involved, the show becomes interactive which satisfies their gratifications. Music 12/7/07 11:41 AM Glossary of terms 12/7/07 11:41 AM Television 12/7/07 11:41 AM 12/7/07 11:41 AM 12/7/07 11:41 AM 07/12/2007 11:41 AM 07/12/2007 11:41 AM ...read more.