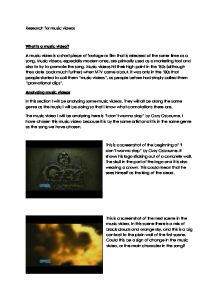 Research for music videos What is a music video? A music video is a short piece of footage or film that is released at the same time as a song. Music videos, especially modern ones, are primarily used as a marketing tool and also to try to promote the song. Music videos hit their high point in the '80s (although they date back much further) when MTV came about. It was only in the '80s that people started to call them "music videos", as people before had simply called them "promotional clips". Analyzing music videos In this section I will be analyzing some music videos. They will all be along the same genre as the music I will be doing so that I know what connotations there are. ...read more.