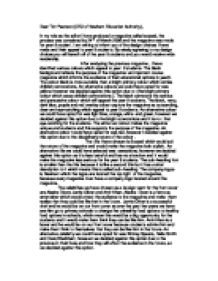 My Design for a Magazine Cover analysis.

Dear Tim Pearson (CEO of Newham Education Authority), In my role as the editor I have produced a magazine called sussed, the process was completed by 24th of March 2008 and the magazine was made for year 9 student. I am writing to inform you of the design choices I have made and their appeal to year 9 students. By wisely agreeing to my design choices you will benefit all of the year 9 students and you would receive wide readership. After analysing the previous magazine, I have identified various colours which appeal to year 9 students. The black background reflects the purpose of the magazine: an important course magazine which informs the audience of their educational options in year9. The colour black is more suitable than a bright primary colour which carries childish connotations. An alternative colours we could have opted for was yellow; however we decided against this option due to (the bright primary colour which cause childish connotations). ...read more.

The sub-heading font is smaller than the title because it is like a second title but it has a short description to it which means this is called sub-heading. The company logos is Newham which the logos are located the top right of the magazine, because every magazine must have a company logo located around the magazine. The celebrities we have chosen as a design team for the front cover are Alesha Dixon; Jamie Oliver and Amir Khan. Alesha Dixon is a famous entertainer which would attract the audience to the magazine and make them realise that they could be like her in the future. Jamie Oliver is a successful chef and he would be on our front cover as over the past few years we have see him go to primary schools to change the unhealthy food options to healthy food options in schools, which mean this would be a big opportunity for the students and it would make them think they can be like him. ...read more.

In 2009 I intend to improve the various colours like; the black background colour to white with Olympic colour which would make the reader think that there is a future ahead so it would make them read the magazine causing wider readership. Also I intend to change the celebrity from left to right to Cheryl Cole (from Girls Aloud band), Gordon Ramsey (Celebrity Chef) and Lewis Hamilton (F1 racer), there 3 celebrities would make for a perfect magazine front cover because it would make the audience draw more attention to the magazine and make them feel if they could be successful in life. To Conclude I have enclosed a design choices treatment for the magazine. This describes every aspect of the magazine front cover, outlining all types of colours, text & font, celebrity and layout which will be involved. I would be most grateful if you wisely accept my design choices for 2009 and hope to hear feedback regarding these design choices in the near future. ...read more.