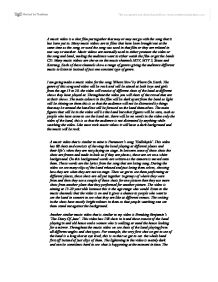 A music video is a shot film put together that may or may not go with the song that it has been put to. Many music videos are to films that have been brought out at the same time as the song, or used the song was used in that film or they are related in one way or another. Music videos are normally used to either promote the video or the song and band, making the audience want to either watch the film or get the bands CD. Many music videos are shown on the music channels MTV, MTV 2, Scuzz and Kerrang. Each of these channels show a range of genres giving the audience different music to listen to instead of just one constant type of genre. I am going make a music video for the song 'Where Now' by Where On Earth. The genre of this song and video will be rock and will be aimed at both boys and girls from the age 13 to 20. ...read more.

This video has 88 shots and consists of showing the band playing at different places and their life's when they are not playing on stage. In between some of these shots the shots are frozen and made to look as if they are photos, these are set on a white background. On this background words are written as the camera is moved onto them. These words are the lyrics from the song that are being sung. During the video we see many clips of the band relaxed and just being them selves, showing how they are when they are not on stage. Then we get to see them performing at different places, these shots are all put together in groups of where they were from and then they use a couple of these shots for one picture then they use more shots from another place that they performed for another picture. The video is aiming at 13-20 year olds because this is the age range who would listen to the music channels that ...read more.

The lighting when the band are playing is not really dark because it is as if there is light escaping through the cracks in the windows and hitting them when they play. All of the band are wearing dark clothing so they stand out against the light that is coming through. The women throughout the video is dressed in white and this contrasts with her hair and makes her stand out more as her surroundings are more grey than white. We see many close ups of the lead singer, but not many close ups of the rest of the band, many of the shots that are on the band are medium and medium close-ups, this is to show who is the main singer in the band. There is not much colour in the video, only shades. The only colour we get to see is a rose that the lead singer is holding at the beginning and end of the video but even then the rose is not brightly coloured but a dull red. ...read more.