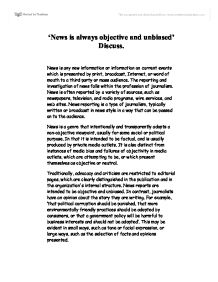 ‘News is always objective and unbiased’

News is any new information or information on current events which is presented by print, broadcast, Internet, or word of mouth to a third party or mass audience. The reporting and investigation of news falls within the profession of journalism. News is often reported by a variety of sources, such as newspapers, television, and radio programs, wire services, and web sites. News reporting is a type of journalism, typically written or broadcast in news style in a way that can be passed on to the audience.

News is a genre that intentionally and transparently adopts a non-objective viewpoint, usually for some social or political purpose. In that it is intended to be factual, and is usually produced by private media outlets. It is also distinct from instances of media bias and failures of objectivity in media outlets, which are attempting to be, or which present themselves as objective or neutral.

Traditionally, advocacy and criticism are restricted to editorial pages, which are clearly distinguished in the publication and in the organization's internal structure. News reports are intended to be objective and unbiased. In contrast, journalists have an opinion about the story they are writing. For example, ‘that political corruption should be punished, that more environmentally friendly practices should be adopted by consumers, or that a government policy will be harmful to business interests and should not be adopted’. This may be evident in small ways, such as tone or facial expression, or large ways, such as the selection of facts and opinions presented.

Some journalists reject that the traditional ideal of objectivity is possible in practice, either generally, or due to the presence of corporate sponsors in advertising. Some feel that the public interest is better served by a diversity of media outlets with a variety of transparent points of view.

News organizations are often expected to aim for objectivity; reporters claim to try to cover all sides of an issue without bias, as compared to commentators or analysts, who provide opinion or personal point-of-view. However, several governments impose certain constraints or police news organizations for bias. In the United Kingdom, for example, limits are set by the government agency Ofcom, who is the Office of Communications. Both newspapers and broadcast news programs are generally expected to remain neutral and avoid bias except for clearly indicated editorial articles or segments, which are often published throughout.

Even in those situations where objectivity is expected, it is difficult to achieve, and individual journalist may fall foul of their own personal bias, or succumb to commercial or political pressure. Individuals and organizations that are the subject of news reports may use news management techniques to try to make a favourable impression. Because no human being can remain entirely objective (each of us has a particular point of view), it is recognized that there can be no absolute objectivity in news reporting so its unfair to say that news related matters stay on the fair side of points of view and the speech that everyone is entitled to their opinion.