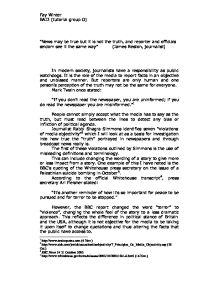 &quot;News may be true but it is not the truth, and reporter and officials seldom see it the same way&quot; (James Reston, journalist).

"News may be true but it is not the truth, and reporter and officials seldom see it the same way" (James Reston, journalist) In modern society, journalists have a responsibility as public watchdogs. It is the role of the media to report facts in an objective and unbiased manner. But reporters are only human and one person's perception of the truth may not be the same for everyone. Mark Twain once stated: "If you don't read the newspaper, you are uninformed; if you do read the newspaper you are misinformed."1 People cannot simply accept what the media has to say as the truth, but must read between the lines to detect any bias or infliction of political agenda. Journalist Rabbi Shagra Simmons identifies seven "violations of media objectivity"2 which I will look at as a basis for investigation into how true the "truth" portrayed in newspapers and through broadcast news really is. The first of these violations outlined by Simmons is the use of misleading definitions and terminology. This can include changing the wording of a story to give more or less impact from a story. One example of this I have noted is the BBC's quoting of the Whitehouse press secretary on the issue of a Palestinian suicide bombing in October3. ...read more.

Selection of quotes is down to the journalist, and there is the risk or even temptation of only including the opinions of witnesses who share the reporters' own views. Gaye Tuchman tells of the reality of this occurrence: "Adding more names and quotations, the reporter may remove his opinions from the story by getting others to say what he himself thinks."13 This can be a real problem for journalists to overcome, as it is not easy to remain entirely objective about important social and economic issues affecting the world around them. Sticking to material facts and providing a balanced and unclouded view of happenings is not always possible. Lack of context is another element that can affect the way news is perceived. By failing to include adequate background information and provide a full context, facts can be misconstrued. This is a particular problem in broadcast journalism. The backdrop to a TV news report can distort the meaning of the story being portrayed. By overlaying images that are misleading or even unrelated to the story, a different message than conveyed in the commentary can be communicated. On Friday October 11, the BBC published a piece on the decreased Palestinian olive harvest. ...read more.

does not invalidate the concept of influence."16 The media has a responsibility to present fair and accurate coverage of local and world events. I have found that there are many inadequacies within the mass media and that it is not nearly as objective as it should be. 1 http://www.twainquotes.com (4 Nov.) 2 http://www.aish.com/jewishissues/mediaobjectivity/7_Principles_On_Media_Objectivity.asp (28 Oct.) 3 BBC News 24 21 October 2002 4 http://www.whitehouse.gov/news/releases/2002/10/20021021-6.html (14 Nov.) 5 http://www.quotemeonit.com/truth.html (5 Nov.) 6 Bagdikian B. (1997) The Media Monopoly, fifth edition, Boston, Beacon Press 7 Sampson A. "The Crisis at the Heart of Our Media" in Tumber H. (1999) News a Reader, Oxford University Press 8 The Times Wednesday November 6 2002 9 The Scottish Daily Mirror Wednesday November 6 2002 10 Gieber W. "News Is What Newspapermen Make It" in Tumber H. (1999) News A Reader, Oxford University Press 11 http://www.eyeonthepost.org/resource/Default.asp?case=studies (14 Nov.) 12 http://www.tzemach.org/fyi/docs/media.htm#opinions (28 Oct.) 13 Tuchman G. "Objectivity as Strategic Ritual: An examination of Newsmen's Notions of Objectivity" in Tumber H. (1999) News a Reader, Oxford University Press 14 The Guardian Monday October 14 2002 15 http://www.quotemeonit.com/fact.html (14 Nov.) 16 Kitzinger J. "Media Influence Revisited: An Introduction to the New Effects Research" Briggs & Cobley (2002) The Media: An Introduction, second edition, Dorset, Dorset Press Fay Winter BAJ2 (tutorial group O) ...read more.