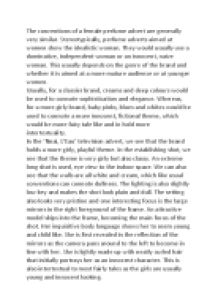 ï»¿The conventions of a female perfume advert are generally very similar. Stereotypically, perfume adverts aimed at women show the idealistic woman. They would usually use a dominative, independent woman or an innocent, naïve woman. This usually depends on the genre of the brand and whether it is aimed at a more mature audience or at younger women. Usually, for a classier brand, creams and deep colours would be used to connote sophistication and elegance. Whereas, for a more girly brand, baby pinks, blues and whites would be used to connote a more innocent, fictional theme, which would be more fairy tale like and in hold more intertextuality. In the ‘Nnai, L’Eau’ television advert, we see that the brand holds a more girly, playful theme. In the establishing shot, we see that the theme is very girly but also classy. An extreme long shot is used, eye view to the indoor space. We can also see that the walls are all white and cream, which like usual conventions can connote dullness. ...read more.

After this, the lighting becomes higher key and everything in the frame as she turns around becomes brighter. The incidental music begins to build up in tempo and helps to establish the scene. When she is being led through the maze by the owl, we continue to see the girl as an inquisitive, innocent character. When she reaches the tree, we see examples of intertextuality. One being snow white as she retrieves an apple from the tree, which symbolizes the fragrance. The advert ends with the model clasping the bottle, seeming protective over it. The advert shows the transition the model goes through after finding the fragrance. The advert?s primary target market is teenagers/ young adults. This is similar to the magazine advert from ?Nina, L?Elixir.? In the magazine advert, we see many similarities that we can compare to the television advert. The main similarity is the over all mise en scene. This is because of the similarities in the lighting and colour, the way the women are represented and the setting and props. ...read more.

The bright, ruby red coloured apples also stand out against the light, plainer backgrounds. Both adverts are very clearly aimed at a young women aged from around 13 to 23. The age of the models contribute a large amount to the target market. The models used have been selected down to current trends and desires, which would be the most likely to be desired by the audience. In the television advert, the model is classy and more sophisticated, which would be desired by young women who aspire to look that way. Whereas, in the magazine advert, we see a cheekier, less serious model, which allows a different type of 16-23 year old woman to desire the product. The adverts also appeal to this target market as the brand is shown to be more sophisticated regardless of its young themes and conventions, which nowadays, is very fashionable amongst young people. Over all, the women are represented in quite a positive way. They are shown to be independent as well as innocent. They are also modest looking which allows them to positively represent themselves to the target market of young women. The adverts establish the product well and sell the product effectively to the audience. ...read more.