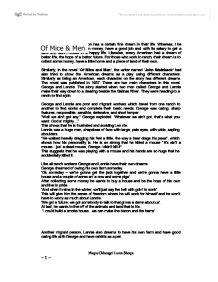 Every single individual person has a certain fine dream in their life. Whereas, the American dream was to earn money, have a good job and with its salary to get a safe and warm house in a happy life. Likewise, every American had a dream of better life, the hope of a better future. For those who work in ranch, their dream is to collect some money, have a little home and a piece of land of their own. Similarly, in the novel 'Of Mice and Men', the writer named 'John Steinbeck' had also tried to show the American dreams as a play using different characters. Similarly as being an American, each character on the story has different dreams. The novel was published in 1937. There are two main characters in this novel George and Lennie. The story started when two men called George and Lennie make their way down to a clearing beside the Salinas River. They were heading to a ranch to find a job. George and Lennie are poor and migrant workers which travel from one ranch to another to find works and complete their basic needs. ...read more.

In order to join their dream he agreed to work on ranch, cook, and clean for them. Also to share some money he has left when his hand was lost. He is afraid of being alone and dying home so he could do anything to live together and take care of him because he is going older. 'Suppose I went in with you guys. That's three hundred...', 'I ain't much good but I could cook and tend the chickens and hoe the garden some'. The only woman in the ranch is Curley's wife. She is pretty, lonely, flirtatious and wear lots of makeup. "....if he ain't, I guess I better look some place else, 'she said playfully". This shows that she is flirting with other because she is lonely and her husband Curley don't give her much attention. Her dream was to be a movie star and be famous and make a better life. 'Nether time I met a guy, an' he was in pitches... He says he was gonna put me in the movies'. Before being married to Curley she had meet a man who told her that she could be an actress and he would send her a letter but she never received one. 'I never got that letter... ...read more.

Similarly, George also loves Lennie and don't want him get hurt but he knows that he's gonna die any how so he don't want to do mistake as Candy did. Therefore he shot Lennie while he was thinking about the rabbits in their own farms. Because of this tragic ending no one in the ranch was able to complete their dream. George's and candy's dream was not complete because Lennie was dead. The Curley's wife's dream also didn't come true because she was killed by Lennie. In the end of the novel, none of the characters achieve his or her dream. It is because due to a lack of opportunity and the way society is organized, than to anything else. Through this novel the Steinbeck wants to shows that the entire American has dream. 'The dream of a land in which life should be better and richer and fuller for everyone, with opportunity for each according to ability or achievement'. It was difficult for the lower classes people to complete their dreams. They are poor and helpless. Hence they do not have the opportunity to make the amount of money that is required to complete their dreams. This is how Steinbeck views in the American dreams which are only the causes if pain and suffering. ?? ?? ?? ?? Phupu Chhongel Lama Sherpa ~ 1 ~ ...read more.