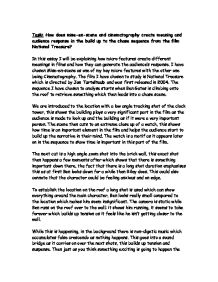 Opening Sequence of a film

Task: How does mise-en-scene and cinematography create meaning and audience response in the build up to the chase sequence from the film National Treasure? In this essay I will be explaining how micro features create different meanings in films and how they can generate the audience's response. I have chosen Mise-en-scene as one of my key micro features with the other one being Cinematography. The film I have chosen to study is National Treasure which is directed by Jon Turteltaub and was first released in 2004. The sequence I have chosen to analyse starts when Ben Gates is climbing onto the roof to retrieve something which then leads into a chase scene. We are introduced to the location with a low angle tracking shot of the clock tower, this shows the building plays a very significant part in the film as the audience is made to look up and the building as if it were a very important person. The scene then cuts to an extreme close up of a watch, this shows how time is an important element in the film and helps the audience start to build up the narrative in their mind. The watch is a motif as it appears later on in the sequence to show time is important in this part of the film. ...read more.

The audience cannot see Ben's facial expression which can allow the viewer to have their own opinion on the situation and allows them to create there own emotions as opposed to having to feel the same way the character does, this can create a sense of amazement for the viewer. There is another POV shot which is when Riley looks outside the window to find the enemies outside; this shows the audience the world from his point of view and makes Riley seem like a prisoner as he and the others are trapped inside. Then there is a sudden change of view which makes the audience seem like they are the enemy as they look on the other side of the window to see Riley. A low angle shot of Ian and Shaw in the clock tower looking down on Abigail and Riley show that they are superior and have more control over the situation as they are looking down on these two while they have no idea they are being watched. This creates uneasiness as you don't know what to expect. Throughout this sequence there is cross-cutting between the parallel narratives; this occurs when Ben splits himself from Abigail and Riley. This creates a sense of realism as this is accurate as to what would happen if this was in everyday life and the audience is able to relate to the film. ...read more.

This makes the audience feel tense. By Ben's facial expressions, the audience can see there is no easy way out of this mess as he seems worried. There is a high angle tilt down of the fire escape which also shows how far off the ground he is, which re-enforces that he is in danger and we unable to predict the outcome of this situation which creates a lot of tension. Finally Ben gives in and throws the bag which holds the documents, this is a significant part of mise-en-scene, as this is the reason the whole chase scene just went on. This shows how something little had such a big part in the sequence and could have left Ben without a life. Overall we have found out that mise-en-scene helps us generate an idea that one of the themes in the film is treasure hunting, we can also use aspects of mise-en-scene to tell us that the genre is action. Cinematography tells us that through extreme close ups we can generate ideas of the narrative. Through long shots we are able to establish the location. And POV shots position us in the film which makes the audience feel a part of the action. To conclude micro features are an important part of film as they create meaning and effect. (1,377 words) As Film Studies Coursework ...read more.