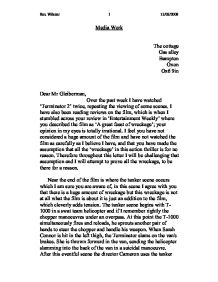 Over the past week I have watched Terminator 2 twice, repeating the viewing of some scenes. I have also been reading reviews on the film, which is when I stumbled across your review in Entertainment Weekly where you described the film as A

Media Work The cottage Gas alley Bampton Oxon Ox6 9in Dear Mr Gleiberman, Over the past week I have watched 'Terminator 2' twice, repeating the viewing of some scenes. I have also been reading reviews on the film, which is when I stumbled across your review in 'Entertainment Weekly' where you described the film as 'A great feast of wreckage'; your opinion in my eyes is totally irrational. I feel you have not considered a huge amount of the film and have not watched the film as carefully as I believe I have, and that you have made the assumption that all the 'wreckage' in this action thriller is for no reason. Therefore throughout this letter I will be challenging that assumption and I will attempt to prove all the wreckage, to be there for a reason. Near the end of the film is where the tanker scene occurs which I am sure you are aware of, in this scene I agree with you that there is a huge amount of wreckage but this wreckage is not at all what the film is about it is just an addition to the film, which cleverly adds tension. The tanker scene begins with T-1000 in a swat team helicopter and if I remember rightly the chopper manoeuvres under an overpass. ...read more.

This sequence is also slowed down, so the moment is valued through the close up of John's petrified face. The obliteration of the bridge is not only adding to the story line but to the audience it gives them a moment of suspense so they think he has escaped from the T-1000 when a second later he comes flying off the bridge. Making it not, 'A great feast of wreckage' but 'a great piece of directing'. Another example of an extremely important shot in this scene is where Terminator (like a true action hero) comes soaring off a slender piece of concrete onto the lower level of the canal. The shot is a low angle shot it is also slowed down, again to value the moment and give the audience an indication that he is the 'good guy'. This astounding piece of directing subconsciously makes the Terminator an icon in the viewers mind. They may even relate to him as a 'Post modern super hero'. Constantly in this film there is wreckage but this is present in all action films such as 'Die hard' and the early James Bond films, which I am sure you have watched and reviewed being a film critic. These films have an incredible amount more wreckage than 'T2', car chases, which usually end up in an exploding car. ...read more.

By doing this, the director removes countless amounts of crashes and wreckage and narrows it down to just a few minor scrapes and the tyre marks of the truck on John's scrambler. But I hear you saying 'Yes but the lorry being driven by the T-1000 blows up at the end of this scene' I realise that but nevertheless it is not pointless wreckage. Overall, in this film, I would agree with you that there is a large amount of wreckage but all this wreckage is there for a reason. The most obvious reason being, as I said at the start, is to build tension. At this point, more than ever, I would say to myself that the comment you made on the film being 'a great feast of wreckage' is truly un-thoughtful. Though if it was thoroughly thought through I do wonder where you get your phrase. Ironically, Terminate means 'to destroy'. I hope I have now proved to you the film is more than that, an incredible amount more than that. I would now recommend that you re-viewed the film in the light of my letter to understand why I, and presumably a vast amount of others, see this film as a 'one of a kind' action-thriller pondering on the thought that it is not just 'a great feast of wreckage'. Yours faithfully, Reuben Wilsker. Reu Wilsker 1 13/03/2008 ...read more.