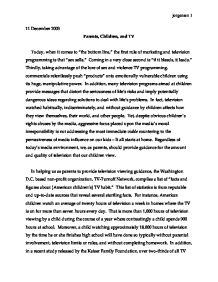 11 December 2003 Parents, Children, and TV Today, when it comes to "the bottom line," the first rule of marketing and television programming is that "sex sells." Coming in a very close second is "if it bleeds, it leads." Thirdly, taking advantage of the lure of sex and violence TV programming, commercials relentlessly push "products" onto emotionally vulnerable children using its huge, manipulative power. In addition, many television programs aimed at children provide messages that distort the seriousness of life's risks and imply potentially dangerous ideas regarding solutions to deal with life's problems. In fact, television watched habitually, indiscriminately, and without guidance by children affects how they view themselves, their world, and other people. Yet, despite obvious children's rights abuses by the media, aggressive focus placed upon the media's moral irresponsibility is not addressing the most immediate viable countering to the pervasiveness of media influence on our kids - It all starts at home. Regardless of today's media environment, we, as parents, should provide guidance for the amount and quality of television that our children view. In helping us as parents to provide television viewing guidance, the Washington D.C. based non-profit organization, TV-Turnoff Network, compiles a list of "facts and figures about [American children's] TV habit." This list of statistics is from reputable and up-to-date sources that reveal several startling facts. ...read more.

Due in large measure to the media's influence, a ninth-grade girl reported, "Sex [. . .] is meaningless, just for fun - like going out and having a soda" (Steyer 55). Comparably, as sex on TV is a marketable commodity, television violence also sells. Both are equally volatile television issues. Even so, the amount of journalistic fare regarding sexual content in the media is only a boulder as compared to the mountain of written material regarding violence in the media, the Mount Everest of television content controversy. After all is said and done, arguments are about non-resolute finger pointing, "spiritual emptiness," and our natural need to exercise vicariously our innate rage. Indeed, by identifying with a violent television protagonist, comic-book creator Gerard Jones argues, "Children engage the rage they've stifled, come to fear it less, and become more capable of [managing] it against life's challenges." However, over the last thirty years more than a thousand studies by reputable medical and public health groups conclude that media violence does affect children. In fact, these extensive well-documented studies warn that unfiltered viewing of TV violence by children can have lifelong harmful effects; the more kids watch television unguided, the more likely they will fear the world around them, believe that violence is an acceptable way to deal with conflict, and become desensitized toward violence in the real world. ...read more.

Key recommendations include the following: * Parents should set limits of TV viewing (for the entire family). * Parents should preview and understand the content of the TV shows watched by their kids. * Parents should actively participate by watching programs with their children, observing their reactions and answering questions children ask. * Parents can stimulate children's critical thinking development by asking their children to express their ideas and opinions about what they are watching on TV. Furthermore, a recently developed program called "media literacy" is available to the public where essentially we as parents can work with teachers specifically to help our children to analyze, evaluate, and critically process the television our children watch. This may not be easy, but who ever said parenting was easy? In this world of lurid media, parents' guiding their children within the TV world from the real world is the first line of defense for kids and their developmental health. Furthermore, even as most TV is designed purely as market-minded entertainment, including sports, cartoons, and commercials, committing to our responsibility as parents in sharing television with our children may provide a springboard for learning as well as lead to positive family experiences. At the very least, child-development expert T. Barry Brazelton advises, "[The] bottom line is that you should share [television] experiences with your kids and be ready to talk with them about what they are experiencing. That's the best thing a parent can do" (Steyer 197). ...read more.