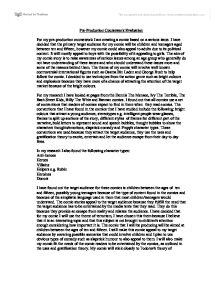 Pre-Production Coursework Evaluation For my pre-production coursework I am creating a comic based on a serious issue. I have decided that the primary target audience for my comic will be children and teenagers aged between ten and fifteen, however my comic could also appeal to adults due to its political content. It will mostly appeal to boys with the possibility of it appealing to girls. The aim of my comic story is to raise awareness of serious issues among an age group who generally do not have understanding of these issues and who should understand these issues more and some of the reasons behind them. The theme of my comic will involve well known controversial international figures such as Osama Bin Laden and George Bush to help follow the comic. I decided to use techniques from the action genre such as bright colours and explosions because they have more of a chance of attracting the attention of the target market because of the bright colours. ...read more.

In my research I also found the following character types: Anti-heroes Heroes Villains Helpers e.g. Robin Heroines Donors I have found out the target audience for these comics is children between the ages of ten and fifteen, possibly young teenagers because of the type of content found in the comics and because of the simplistic language used in them that most children/teenagers would understand. The comic stories appeal to the target audience because they fulfill the need that the target audience has to be entertained by the media texts that they read. They do this because they provide an escape from reality and relaxes the audience. I have decided that for my comic I will use the theme of terrorism, I have chosen this them because I believe that it is an interesting topic and that this subject is not brought to children's attention enough considering how important it is. ...read more.

Some of the minor improvements that I am going to make when I produce my final comic story include more organised frames, better use of colours and more use of words using onomatopoeia. My comic story fits in with the market because it fills a gap in the market because there are not many comics aimed at ten to fifteen year olds that tackle a serious issue such as terrorism. It also fills a gap in the market because it also contains humour that adults would understand making it a comic suitable for adults and teenagers which is unlike many others. This would help to market the product because of the USP of the wide target market and unique content. I think an existing newspaper such as a middle market tabloid or a red top tabloid would be a good newspaper to put my comic is because they are more likely to be read by children/teenagers and are more likely to put less serious content in their newspaper. ...read more.