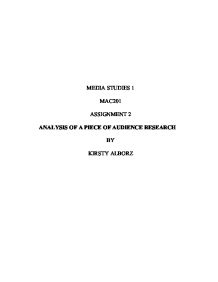 Produce a detailed critical analysis of a piece of academic audience research.

MEDIA STUDIES 1 MAC201 ASSIGNMENT 2 ANALYSIS OF A PIECE OF AUDIENCE RESEARCH BY KIRSTY ALBORZ I am going to produce a detailed critical analysis of a piece of academic audience research. I will briefly discuss who completed the research and who was involved and will explain the reason behind it. I will explain how many people they acquired and how they were chosen, for example their sex, age, race and religion. I will explain how these people were recruited and how information was retrieved. I will then move onto how they analysed the material which they collected. I will then begin my analysis of the research. I will begin by looking at what the researcher found out and consider what this means. I will then go on to critically discuss their analysis and their conclusions. I will also mention how their work corroborates hypothesise which are already thought in society today, or on the other hand opposes them. As well as looking at how far the research differs from the popular ideas about the audiences. The audience research I have chosen is entitled "Television Violence and the Adolescent Boy". This was carried out by William A. Belson through June 1970 to July 1970 in the city of London. He used 1565 mixed race boys in the age range of 12 -17. ...read more.

The boys would have to be exposed to a very high content of violence on television before their acts of violence would become very bad, e.g. killing someone. This disproves hypothesis a. Belson found that although children committed violent acts, they were not classed as violent to the person who committed it. This proves the hypotheses of desensitisation to certain acts of violence because of there constant exposure to it. E.g. if they were to see someone being punched in the face in every programme they watched in time they would become desensitised and would not be bothered by it. This applies to more harsh violent acts too, meaning that the children would be more likely to commit these acts after long exposure because they become unbothered by it. Belson also points out that the children who watched violence had a higher threshold for violence toward them and violence witnessed outside compared to those who viewed less violence. Belson suggests that although the boys do partake in certain violent acts, it is mainly down to imitation. Not serious violent acts where the boy has deliberately set out to hurt someone. But rather by playing. Children find violent characters on television fun to imitate as the idea's featured on television are more exciting and enthralling than their own imagination. Examples given were comic books such as Beano and Dandy, nowadays it would be programmes such as Mighty Morphin Power Rangers and WWF wrestlers. ...read more.

My views were confirmed by this research, as I believe that children have to be that way inclined to want to commit a really serious act of violence. I also feel that children are quite violent anyway and unless taught that punching their peers is wrong they will continue to do so whether exposed to it on television or not. Anything which children do copy from the television is simply imitation which applies to not only violence but also dressing like characters from shows or copying what they say. The fact that they don't know any better is the most likely reason for them trying out some of the violent acts for example in California, a seven-year-old boy sprinkled ground-up glass into the lamb stew the family was to eat for dinner. When asked why he did it he replied that he wanted to see if the results would be the same in real life as they were on television (Howe 72). It's the job of the parents to either stop the children from viewing these programmes, or to explain to the child that what they are viewing is a) not real, or b) that they should never do it. Although this is almost thirty years old, it still proves that there are stereotypical roles which were perceived which are still evident today, maybe even more so with the representation of them in films. Belson proves that contrary to many peoples ideas, television does not cause children to be seriously violent, but is a cause of imitation. ...read more.