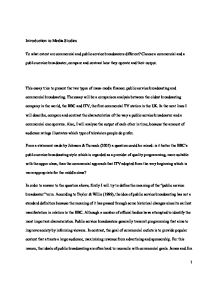 has written that: "service must not be used for entertainment alone and that it should be continually striving to the greatest number of homes ... all that was best in every department of human knowledge, endeavour, and achievement ... Broadcasting should give a lead to public taste rather than pandering to it". This idea says that the BBC should provide programmes that are in the public interest but could be also interpreted as a way of controlling and leading it. Ten years after the departing of John Reith as the Director-General, in the British social life has appeared the idea of commercial television. Nearly six years lasted the struggle and the implementation of the commercial television or independent how was named in many studies. On Thursday 22 September 1955 Associated-Rediffusion started to transmit programmes in the London area, event which marks the breaking of the BBC's monopoly. This initiative has had numerous contestants mainly because Britain, until that time, had only public owned broadcaster and the monopoly position held by the BBC was conceived like a 'national brand'. The Reithian period influenced so much the British mass-media spectrum, that even in our days his principles are still respected by the terrestrial TV stations, values that lies in the policy of mass-media regulators. Crisell (1997) states that the struggle to have commercial television in the UK was directed by Norman Collins, one of the ITV's founders, and it was strongly sustained by business such as Pye Radio, the West End theatre managers, the advertising agency J. ...read more.

This is certainly a common feature which the BBC and ITV share, despite the fact that it is only valid when we are referring to the international department of the BBC, World Service. A relevant comparison between the BBC and ITV is the audience shares registered in time. Seymour-Ure (1996, p.175) shows the audience ratings from 1956 to 1994. Right from its start in 1955, ITV succeed to exceed the BBC's performance in matters of audience. After the first year of broadcasting, ITV had 62% of audience share and the BBC only the rest of 38%. The situation remained similar until the BBC launched its second channel, BBC 2, in 1964. Generally, after this event, the BBC was in top of audience rankings, only by totalling both stations: BBC 1 and BBC 2. In our days, the public funded broadcaster through its main channel, BBC 1, it is the leading TV station in the UK, with an amount of 24.2% of share. In the same ranking powered by the Broadcasters' Audience Research Board (2008), ITV 1 has just 16.2% of share. As a conclusion of the facts presented in this essay, the BBC, as a license fee funded public service broadcaster distinguishes of the ITV's commercially financed system for many reasons. Whether there it is the completely different funding system, the different types of programmes that are offered to the public or the administration structure, the BBC and ITV have as a common wealth the main principle of the early British television, principle which is respected even in our days: "to inform, educate and entertain". ...read more.