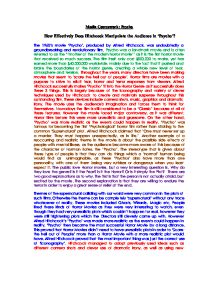 Media Coursework: Psycho How Effectively Does Hitchcock Manipulate the Audience in 'Psycho'? The 1960's movie 'Psycho', produced by Alfred Hitchcock, was undoubtedly a groundbreaking and revolutionary film. Psycho was a landmark movie and is often referred to as the ''mother of the modern horror movie'' as it is the first horror movie that received so much success. The film itself only cost $800,000 to make, yet has earned more than $40,000,000 worldwide, mainly due to the fact that it pushed and broke the boundaries of the horror genre, creating a whole new level of fear, atmosphere and tension. Throughout the years, many directors have been making movies that seem to "scare the hell out of people". Horror films are movies with a purpose to strive to elicit fear, horror and terror responses from viewers. Alfred Hitchcock successfully makes 'Psycho' fit into the Horror Genre as it successfully does these 3 things. This is largely because of the iconography and variety of clever techniques used by Hitchcock to create and maintain suspense throughout this outstanding film. These devices include camera shots, music, graphics and dramatic irony. The movie uses the audience's imagination and forces them to think for themselves. Nowadays the film is still considered to be a 'Classic' because of all of these features. However the movie faced major controversy, as it was different. ...read more.

Although colour TV had been invented, Hitchcock cleverly used black and white instead, as a means of manipulating his audience into fear and disgust because of the associations we make with the colour black of darkness and evil. The combination of black and white portrays a dark, dull, and scary atmosphere maintaining suspense for the audience. This sets a dreary and unwelcoming mood gripping the audience further. Alfred Hitchcock uses several cinematic techniques to create a mise-en-scene. Mise-en-scene is everything a viewer can see within a certain frame and consists of many aspects. For instance, Hitchcock uses a high-angle, mid range establishing shot to put Marion in her context, and highlight her vulnerability. The music for psycho is critical to the film as a whole. Each time a character is killed, when the murderer emerges from their hiding place, the high-pitched music strings up the jumpy rhythm, before the rest of the instruments join in. The music sets the tone for almost all the scenes. The shower scene, in which Marion is fatally stabbed, would be nowhere near as effective without its music. Music is also the key to the film due to its ability to build up expectations within the audience and create large amounts of tension and suspense. The usage of different camera shots has been applied to create suspense very cleverly by Hitchcock particularly during Marion's flee. ...read more.

This also gives the audience the perception of being helpless, which helps to create a deep tension within them. Hitchcock uses many techniques in the scene which create an atmosphere that can change the audience's disposition in a matter of seconds. 'Psycho' dealt with issues on screen that had not been shown before and seemed totally unacceptable. Nobody had seen a toilet being flushed on TV before. This was because the toilet was considered to be a private place and for it to be shown on screen in front of an audience was thought to be rude and uncivilized. Furthermore, it was the first time ever that a woman wearing a bra on screen had been exposed. This seemed totally unthinkable at the time and offended many people. This is in view of the fact that the general population of the 1960's, was a lot more reserved. Convincing the audience of the reality of the film let Hitchcock mould their conceptions, develop sympathies, and build up identification between them and fictional characters. This hugely increased the despair, shock, and the feeling of loss even when a character is brutally murdered. Through analysing Hitchcock's techniques of creating and maintaining tension and suspense, I have come to the conclusion that they are exceptionally effective. It is no wonder that 'Psycho' became so popular and was a terrifying film in its day, and still makes viewers tense with anticipation of what's to come today. ...read more.