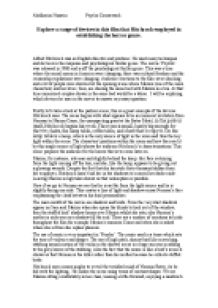 &quot;Psycho&quot;. Explore a range of devices in this film that Hitchcock employed in establishing the horror genre.

﻿Abdikarim Hussein Psycho Coursework Explore a range of devices in this film that Hitchcock employed in establishing the horror genre. Alfred Hitchcock was an English director and producer. He used many techniques and devices in the suspense and psychological thriller genre. The movie ?Psycho? was released in 1960 and is off the psychological thriller genre. This was a time where the social norms in America were changing, there was cultural freedom and the censorship regulations were changing. Audience reactions to the film were shocking and a lot of people were shocked at the opening scene where Marion (one of the main characters) and her lover, Sam, are sharing the same bed with Marion in a bra. At that time unmarried couples shown in the same bed would be a taboo. I will be exploring which devices he uses in the movie to answer my essay question. Firstly let?s take a look at the parlour scene; this is a great example of the devices Hitchcock uses. ...read more.

This creates a line of light and shadow across Norman?s face emphasising the clash between his dual personalities. The main motifs of the movie are shadows and birds. From the very start shadows appear on Sam and Marion when she opens the blinds to look out of the window, then the stuffed bird? shadow looms over Marion whilst she eats, also Norman?s mother is only seen as a shadow till the end. There are a number of mentions to birds throughout the film for example Marion?s surname Crane and when she is asked where she is from she replies phoenix. The use of music is very important in ?Psycho?. The music used is a tense which sets the tone of violence and danger. The use of high pitch, almost bird like screeching, stabbing sound-motion of the violin in the shower scene is a huge success in adding to the gory horror of the stabbing. Also the fact that the music is like a bird?s screech shows us that Norman is the killer rather than his mother because he collects stuffed birds. ...read more.

This reflects the stereotypical views of the male being the dominant sex. Also both Marion and Norman are frustrated with the relationships they are having. Marion is frustrated with Sam who has no commitment for their relationship. Norman is stuck in a crippling relationship with his mother. Through out the film Hitchcock uses these devices to build up horror and suspense. I personally think that the use of shadows and the camera angles are the main devices of the movie. The shadows show us how and what contrast there is but also show us a brief insight into the characters personality. The camera angles add fun to the movie hiding little things for the audience to look out for that make a really big effect on what is happening in that certain scenes. This film is a major success in establishing the horror genre, for example if we go the shower scene the use combination of music, shadowing of the character and then the murdering of the person in the shower. Hitchcock has made great use of the devices he has used in ?Psycho?. ...read more.