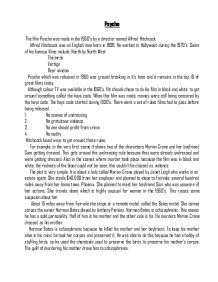 Psycho. Hitchcock chose to do his film in black and white to get around something called the hays code. When this film was made, movies were still being censored by the hays code. The hays code started during 1930s

Psycho The film Psycho was made in the 1960's by a director named Alfred Hitchcock. Alfred Hitchcock was an English man born in 1899. He worked in Hollywood during the 1970's. Some of his famous films include: North by North West The birds Vertigo Rear window Psycho which was released in 1960 was ground breaking in it's time and it remains in the top 10 of great films today. Although colour TV was available in the 1960's, Hitchcock chose to do his film in black and white to get around something called the hays code. When this film was made, movies were still being censored by the hays code. The hays code started during 1930's. There were a set of rules films had to pass before being released. 1. No scenes of undressing. 2. No gratuitous violence. 3. No one should profit from crime. 4. No nudity Hitchcock found ways to get around these rules. For example, in the very first scene it shows two of the characters Marian Crane and her boyfriend Sam getting dressed. ...read more.

He was able to do this because he had a hobby of stuffing birds, so he used the chemicals used to preserve the birds to preserve his mother's corpse. The guilt of murdering his mother drove him to schizophrenia. Eventually he is caught by Marian Crane's boyfriend and her sister. In my opinion, the plot is highly convincing and believable. The shower scene was filmed in a 4sq meter set. The set was so small that the actors were never on set together. During this scene there were over 70 camera shots squeezed together. This is called a fast edited scene. Marian crane was not naked in this scene but she was wearing a flesh coloured body suit. I think the shower scene can be classed as symbolic. The start of this scene Marian crane decides to face up to her crime and return to Phoenix. When she enters the showers and starts washing her, it symbolises her washing her crime away. At the start of this scene, she dominates the screen. One shot away from the murder, her shot is in the corner and because of this our focus is beginning to shift. ...read more.

The music is tuneless; it makes no sense, just like the murder. As soon as the murder is over, the music has a tune again and the shots are longer. We see her struggling. A close-up of her hand slipping down the tile symbolises her life slipping away. We see a few seconds of her final moments in life. Her hand reaches up for help, grabbing the curtain. We see an overhead shot of the curtain falling down on her. Finally we see her blood being washed away. The camera follows it all the way down to the plughole, it symbolises her life going down the drain. At the end of this scene we see the money still wrapped in the newspaper, untouched. It shows this wasn't a murder for profit. In my opinion, Psycho is one of the best films I've seen. From the beginning it keeps you enthralled and there are unexpected twists and turn which makes the film phenomenal. Although Psycho wouldn't be classed as a horror film today, it still made me jump in certain scenes. I think Psycho is a classic and I can see why it's still in the top 10 of best films today. ...read more.