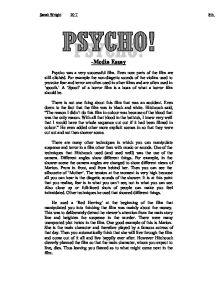 Psycho. There are many other techniques in which you can manipulate suspense and terror in a film other than with music or sounds. One of the techniques that Hitchcock used (and used well) was the use of the camera.

-Media Essay Psycho was a very successful film. Even now parts of the film are still clich�d. For example the non-diagetic sounds of the violins used to provoke fear and terror are often used in other films and are often used in 'spoofs.' A 'Spoof' of a horror film is a hoax of what a horror film should be. There is not one thing about this film that was an accident. Even down to the fact that the film was in black and white. Hitchcock said, "The reason I didn't do this film in colour was because of the blood that was the only reason. With all that blood in the bathtub, I knew very well that I would have the whole sequence cut out if it had been filmed in colour." He even added other more explicit scenes in so that they were cut out and not then shower scene. There are many other techniques in which you can manipulate suspense and terror in a film other than with music or sounds. One of the techniques that Hitchcock used (and used well) was the use of the camera. Different angles show different things. For example, in the shower scene the camera angles are changed to show different views of Marion. ...read more.

Also as the scene draws closer to the point where Marion is brutally butchered the editing cuts become much shorter and faster. The camera moves quickly all over the place. Starting just by looking at Marion from several different views - up at the showerhead, down on Marion as she washes her hair. Then the camera looks past her to see the silhouette of Mother coming in through the door. You cannot hear anything but the shower at this point. Then as she pulls back the curtain you hear the non-diagetic sounds of the violin. The contrast from the sound of the shower to the noise of the violins makes it all the more frightening. It is at this point that the camera cuts are very short and sharp and moves with every stab Mother takes. This increases the suspense making it higher and higher until Marion is dead, and Mother is gone. After that the camera seems too look down into emptiness, the blood washing slowly down the plug hole and then the final cut of that scene into Marion's eye where is zooms out and pans around the bathroom out the door and zooms in on the money. Again this leaves you thinking about the money and what might happen to it. ...read more.

Like it's as if you are looking around the house through her eyes. This makes you feel her anxiety and fear. The Final Shot of that scene is full of activity. All the tension throughout the scene is mounted up in to one spot where all the motion is going on. It is then you realise that is was not Mother that was performing the murders but it was actually Norman. From looking closely at this film and taking note of the different techniques that Hitchcock used to make the film more interesting and exciting I have learnt a lot. I have learnt that by changing the speed of which the camera editing changes and adding different kinds of music and other sounds you can manipulate the way the audience feels about the character or situation. Also the film is made more interesting if you include plot twists and Red Herrings so that the film does not become predictable. Also Hitchcock made the film more thoughtful by putting in ironic lines. Such as, "A boy's best friend is his mother," and, "I can handle a sick old woman." All together Alfred Hitchcock used many different techniques that made the audience thing and feel certain things about certain people. Thus achieving what he set out to do, direct the audience as well as the film. ?? ?? ?? ?? Sarah Wright 10 T 8th April 2002 ...read more.