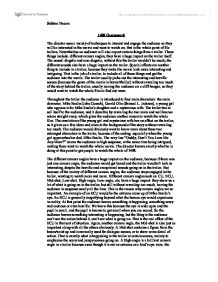 Review of the trailer for the movie 1408.

1408 Coursework The director uses a variety of techniques to interest and engage the audience so they will be interested in the movie and want to watch on, that is the whole point of file trailers. Nevertheless an audience will also expect certain things from a trailer. These things include: different camera angles, they have a huge impact on the trailer itself. The sound: diegetic and non-diegetic, without this the trailer wouldn't be much; the different sounds also have a huge impact on the trailer. Special effects are another thing to include in a trailer, because they make the movie look more interesting and intriguing. That is the job of a trailer, to include all of these things and get the audience into the movie. The trailer usually picks out the interesting and horrific scenes (because the genre of the movie is horror/thriller) without revealing too much of the story behind the trailer, usually leaving the audience on a cliff-hanger, so they would want to watch the whole film to find out more. Throughout the trailer the audience is introduced to four main characters: the main character, Mike Enslin (John Cusack), Gerald Olin (Samuel L. Jackson), a young girl who appears to be Mike Enslin's daughter and a mysterious wife. The trailer has to sell itself to the audience, and it does this by revealing the two main and well known actors straight away, which gives the audience another reason to watch the whole film. The revelation of the young girl and mysterious wife has an effect on the trailer, as it gives us a few ideas and clues to the background of the story without revealing too much. ...read more.

The director has carefully picked out certain parts because he knows what effect they will have on the audience. For example: when Mike Enslin is looking out the window, he turns around and some deranged person attacks him, and when, at the end, the little girl approaches Mike Enslin and say's "Daddy, Don't You Love Me Any More?" , then a scary hand comes out of nowhere. These are just few of the special effects to do with ghosts and ghouls of room 1408, which the director has specifically chosen to use in the trailer. Also the special effects in the trailer include the extreme weather change in that one room. 1408: from a normal room to rainy, to snow, to wind and rain again, back to a normal room, and in the end the whole room is burnt down. And all this in just one room! These types of effects are a great thing to put in a trailer since the audience would mostly expect them and the special effects would have a HUGE impact on the audience, again leaving them in suspense, wanting to watch the whole movie. The storyline/plot of the movie is not fully shown in the trailer obviously, but it gives us a faint idea of what the film is going to be about. It always, or usually, leaves the audience in suspense or on a cliff-hanger. The effect of this is a very good thing in a trailer because the most exciting parts are shown; they make the audience want to watch the whole scene, but when the ends of those scenes are not shown, it's called a cliff-hanger. ...read more.

The distinction between diegetic or non-diegetic sound depends on our understanding of the conventions of film viewing and listening. We know of that certain sounds are represented as coming from the story world, while others are represented as coming from outside the space of the story events. A movie trailer with diegetic and non-diegetic conventions can be used to create ambiguity (horror), or to surprise the audience (comedy), but in this case, used to create ambiguity. The audience were drawn into the trailer through many of the different techniques and special effects used in the trailer. The sound, diegetic and non-diegetic, also helped a lot, keeping the audience in suspense, not knowing what is going to happen next, leaving it on a cliff-hanger, leaving wondering. Wondering what is going to happen next. That is the job of a trailer to do precisely that, wanting the audience to watch the whole movie. Getting the audience intrigued wasn't a hard job for this trailer because it contained almost everything an audience would expect from a true horror movie trailer. It contained everything the audience would want for them to watch the entire movie. Throughout the trailer the director knows exactly what he is doing; he knows exactly which parts and scenes from the actual movie to put in the trailer, knowing the audience would expect these things so therefore want to watch the whole movie. Overall I think the trailer for the movie 1408 was very successful in convincing the audience to watch the whole film. ?? ?? ?? ?? Subhan Naeem ...read more.