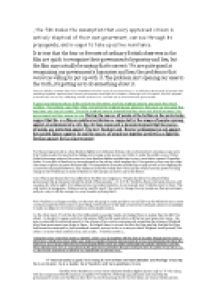 ﻿, the film makes the assumption that every oppressed citizen is actively skeptical of their own government, can see through its propaganda, and is eager to take up active resistance. It is true that the four or five sets of ordinary British observers in the film are quick to recognize their government's hypocrisy and lies, but the film may actually be saying that's correct: We are quite good at recognizing our government's hypocrisy and lies; the problem is that we're too willing to put up with it. The problem isn't opening our eyes to the truth, it's getting us to do something about it. The powerfully symbolic film V for Vendetta uses the voice of one anarchist, V, to influence thousands of people into standing together against their fascist government and fight for freedom. Although set in England, the film appeals to American viewers by reflecting similar policies now carried out by the American government A good example would be at the end of the film when all of the masked people approach the line of soldiers. The soldiers raise their rifles, but when the masked group advance, they give up, because fear was their only tool of control. Once the masked people showed that they were not afraid anymore, the government lost their power to rule. ...read more.

V slowly created a... During the movie, V went from victim to vigilantly, and it is easy to empathize with his chain of reactions through out the movie. V who lived in a totalitarian society where gays, lesbians, freedom of speech and expression of art was not tolerated by the Norse Fire regime was your average civilian that was black bagged off the streets of London and brought into captivity and held at Lark Hill. These individual were seen as social deviant by the government and held in disregard. During his time of captivity V was torture use in a bio terrorist experiments in which he was injected with an unknown virus. V" most certainly is good; he is trying to revive these dormant attitudes and feelings of society. He is an inspirer, he is a leader, he is freedom, and he is goodness in one. The film V for Vendetta is a story about shadowy freedom fighter known only as "V" who along with his companion Evey Hammond, completes V?s vendetta of blowing up parliament and removing the governments? control. In the film an idea that was worth learning about was that ideas are very powerful and live beyond the death of individuals. ...read more.

The fact that he was one of the powerful men in the society, our values towards terrorism was shaped to be evil and immoral. V for vendetta being filmed in 2006, London where there were also a terrorist attack in 2005. The further reinforcement of the terrorist attack in 2005 structured our values towards terrorism to be an evil and unforgiving act where many innocent people were killed. V in the film is portrayed as a protagonist just because all the other characters act to benefit themselves, whereas V has clear idea and acts by how he believe it is best for the society. In the feature film, V is driven by the desire for revenge as much as political idealism. He was mutilated in a fire at a detention center, which specialized in horrifying medical experiments, some time before. He has... V for Vendetta? is a provocative film addressing many of the issues of the political climate we now find ourselves living in. The movie portrays a masked freedom fighter who challenges what has become a totalitarian government. ?V? finds a friend and ally in a young woman named Evey. ?V? successfully motivates the citizens to fight against the oppression of the state. The film provides a stark and glaring reminder of how our own rights and freedoms can be stripped from us under the guise of ?protection?, ?righteousness?, and ?patriotism?. ...read more.