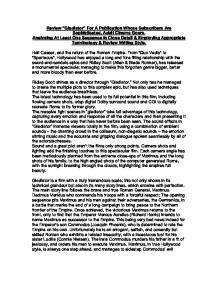 Ridley Scott shines as a director through Gladiator. Not only has he managed to create the multiple plots to this complex epic, but has also used techniques that leave the audience breathless.

Review "Gladiator" For A Publication Whose Subscribers Are Sophisticated, Adult Cinema Goers. Analysing At Least One Sequence In Close Detail & Employing Appropriate Terminology & Review Writing Style. Hail Caesar, and the return of the Roman Empire. From "Quo Vadis" to "Spartacus", Hollywood has enjoyed a long and fore filling relationship with the sword-and-sandals epics and Ridley Scott (Alien & Blade Runner), has released a monumental spectacle; managing to make this forgotten genre bigger, better and more bloody than ever before. Ridley Scott shines as a director through "Gladiator." Not only has he managed to create the multiple plots to this complex epic, but has also used techniques that leave the audience breathless. The latest technology has been used to its full potential in this film, including flowing camera shots, crisp digital Dolby surround sound and CGI to digitally recreate Rome to its former glory. The massive fight scenes in "gladiator" take full advantage of this technology, capturing every emotion and response of all the characters and then presenting it to the audience in a way that has never before been seen. ...read more.

and his men against their adversaries, the Germanics, in a battle that marks the end of a long campaign to bring peace to the Northern frontier of the Empire. Once achieved, the victorious Maximus returns to the front, only to find that the Emperor Marcus Aurelius (Richard Harris) intends to name Maximus as successor to the Empire. This being very bad news indeed for the Emperor's son Commodus (Joaquin Phoenix), who is determined to rule the Empire on his own. Unfortunately he is an arrogant, selfish, and cowardly but skilled Roman who exhibits a twisted insecurity, with a incestuous lust for his sister Lucilla (Connie Nielsen). The irate Commodus murders his father in a fit of jealousy, and orders his men to execute Maximus. Maximus, in true Hollywood style, is always one step ahead, and manages to sidestep Commodus' evil scheme, but discovers, to his horror, that he is now "Father to a murdered son, Husband to a murdered wife." ...read more.

Similar events take place in "Gladiator," with Commodus ordering the killing of Maximus' family; Maximus then looks to seek revenge. The second parallel is that of the "Tempest," where Prospero does not allow Ariel, his slave, freedom until the end of the play. This is again, similarities in "Gladiator," where Proximo does not really allow Maximus to be free until he wins his freedom; also in both the "Tempest" and "Gladiator" the two people that deserve freedom the most do not have it, this is a ironic stereotype that is included in a lot of films, This is a film that surpasses the imagination. Rome, digitally enhanced from the present-day ruins to its perfection in 180 A.D. Costumes appear so natural and real along with the array of battle hardware. The battles are fast and furious, accurate and tense to the last thrust of the sword, and thud of the shield. On horseback, in chariots, on foot with swords to armies in the thousands, each battle scene leaves you bewildered with its shear size and magnitude. Go, get thee to a theatre, and hastily. ...read more.