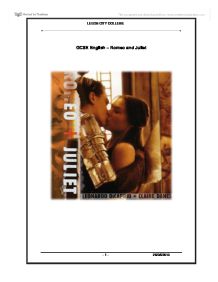 GCSE English - Romeo and Juliet Baz Luhrmann's film of Romeo and Juliet retells the history for modern audience. How effective is the film for modern audience? In this essay I am going to explain in which ways the modern version of Romeo and Juliet is effective for modern audience. Many things have changed from the first version to the modern version, such as colours, sound-tracks, actors, costumes, cars instead of horses, and guns on the place of swords. How effective are all these changes in modern audience? This version has a different start, confronts between Capulets and Montagues are talked about on the news as result of the death of two lovers from the respective families. The way the subject was brought up, through the television, was a good way to attract younger audience because television is seen by many young people and it let their have a little summary of the whole history. Right on the start of the actual film there are various features very attractive to modern audience. ...read more.

It is something typical to happen within youths, particularly boys. Around those fights loads of action was brought up. The boys used guns in most of their fights, sometimes they also use their cars to catch their 'enemies', and these fights used to result in police intervention and even in deaths. The police interventions were massive with cars, helicopters, and television video cameras. The city ended in huge messes after these fights between the boys. It may also happen with some gangs nowadays. It may not be as frequent as it was in the film but youth would understand the feeling of those boys when they were defending their friends and find reasonable create all that chaos. For example, when Mercutio is killed the way Romeo reacted could be understandable and acceptable by modern audience. In my point of view, these points that I just mentioned were very effective when it came to attract masculine modern audience, the boys. In general romances do not attract boys but the way Baz Luhrmann recreated this romance made it more attractive even for boys because all these aspects, rap music, cars, the groups of ...read more.

She took part of the film by sing at the party in the Capulet's mansion right in the moment Romeo and Juliet first met and kissed each other. At this same party, Juliet Capulet was dressed as an angel and it is also the name of one of the soundtracks of the film from Gavin Friday. The camera shots are very agitated and rapid mixed with loud rock and rap music but at the last scenes cameras focused mostly at Romeo and Juliet's last moments together even after both of them being die, in each other's arms and being taken to the morgue. It emphasised the deep love of these young lovers which is the base of the all film and has touched every single character at the film. Baz Luhrmann added his own taste at the film which made the film eye-catching and breathtaking and showed his good abilities in what he did particularly within this legendary Shakespeare's romance by retaining the original language and at the same time designing it to younger modern audience. ?? ?? ?? ?? LEEDS CITY COLLEGE - 1 - 26/05/2010 ...read more.