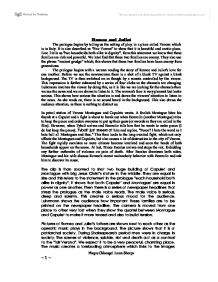 Romeo and Juliet The prologue begins by telling us the setting of play, in a place called Verona which is in Italy. It is also described as "Fair Verona" to show that it is beautiful and exotic place. Line 1 tells us ''two households both alike in dignity'', from this statement we know that these families are rich and powerful. We later find that these two families are enemy. They also use the phrase "ancient grudge" which, this shows that these two families have been enemy from generations. The prologue begins with a woman reading the story of Romeo and Juliet's love for one another. Before we see the newswoman there is a shot of a blank TV against a blank background. The TV is then switched on as though by a remote controlled by the viewer. This impression is further enhanced by a series of four clicks as the channels are changing. ...read more.

The clip is than zoomed to shot two huge building of Capulet and Montague with big Jesus Christ's statue in the middle. They are equal in size and this refers to the statement in the prologue ''each household both alike in dignity''. It shows that both Capulet' and Montague' are equal in power as one another. Then there is a series of newspaper headlines that stress the prologue as the male voice reads. The male voice is serious, deep and solemn. This creates a serious mood for the audience. Luhrmann shows the audience how important these families are to be printed on the newspaper headline. The camera is moved from one place to other very fast when they show the quarrel between Montague and Capulet to make it more tensed and also to build tension. Pictures of Romeo and Juliet's fathers are shown next to each other as the operatic music plays in the background. ...read more.

This little boy signifies innocence and the church suggest religious setting as well as the little boy. The noisy, riotous gunfire creates a picture of city in turmoil. Police officers armed with guns and fire around the area gives us the impression that Verona is not safe and there is a lot of violence. The fire symbolises anger and hatred, - a theme that runs through the ''Romeo and Juliet'' play. In one of the scenes, as the choirboy opens his mouth to sing, a clip of someone shooting a gun is shown. As the prologue ends there is a large cross icon in red with white stripes, which becomes smaller and the text ''Romeo and Juliet'' is shown. The cross replaces the word ''and'' in the text. The red colour of the cross symbolises death. The images in the prologue are like a trailer of what will happen in the film. ?? ?? ?? ?? Phupu Chhongel Lama Sherpa ~ 1 ~ ...read more.