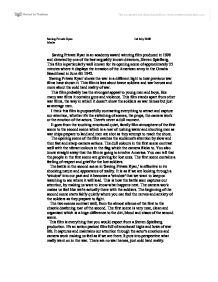 Saving Private Ryan 1st July 2008 Media Saving Private Ryan is an academy award winning film produced in 1998 and directed by one of the best arguably known directors, Steven Spielberg. This film is particularly well known for its opening scene of approximately 25 minutes where it displays the invasion of the American army in the Omaha Beachhead in June 6th 1942. 'Saving Private Ryan' shows the war in a different light to how previous war films have shown it. This film is less about brave soldiers and war heroes and more about the cold hard reality of war. This film probably has the strongest appeal to young men and boys, like many war films it contains guns and violence. ...read more.

roar of rushing water and shouting men as war ships prepare to land and men are shot as they attempt to reach the shore. The opening scene of the film catches the audience's attention by slow and then fast and sharp camera actions. The dull colours in the first scene contrast well with the vibrant colours in the flag which the camera flicks to. You also know straight away that the film is going to involve America. You can tell that the people in the first scene are grieving for lost ones. The first scene contains a feeling of respect and grief for the lost soldiers. ...read more.

The beginning of the second scene starts fairly quietly where you can feel the nerves and anxiety of the soldiers as they prepare to fight. The two scenes contrast well, from the almost silence of the first to the chaotic deafening roar of the second. The first scene is very neat, clean and organised which is a huge difference to the dirt, blood and chaos of the second scene. This film is everything that you would expect from a Steven Spielberg production. It's an action packed film full of emotional highs and lows of war life. It captures and maintains our attention through the actor's emotions and camera work making us feel as if we are there. It puts into perspective what really went on in the war. There are no war heroes, just cold hard reality. ...read more.