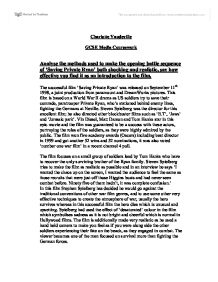 Analyse the methods used to make the opening battle sequence of ‘Saving Private Ryan’ both shocking and realistic, say how effective you find it as an introduction to the film.

The successful film ‘Saving Private Ryan’ was released on September 11th 1998, a joint production from paramount and DreamWorks pictures. This film is based on a World War II drama as US soldiers try to save their comrade, paratrooper Private Ryan, who’s stationed behind enemy lines, fighting the Germans at Neville. Steven Spielberg was the director for this excellent film; he also directed other blockbuster films such as ‘E.T’, ‘Jaws’ and ‘Jurassic park’. Vin Diesel, Matt Damon and Tom Hanks star in this epic movie and the film was guaranteed to be a success with these actors, portraying the roles of the soldiers, as they were highly admired by the public. The film won five academy awards (Oscars) including best director in 1999 and got another 52 wins and 52 nominations, it was also voted ‘number one war film’ in a recent channel 4 poll.

The film focuses on a small group of soldiers lead by Tom Hanks who have to recover the only surviving brother of the Ryan family. Steven Spielberg tries to make the film as realistic as possible and in an interview he says ‘I wanted the chaos up on the screen, I wanted the audience to feel the same as those recruits that were just off those Higgins boats and had never seen combat before. Ninety five of them hadn’t, it was complete confusion.’

In this film Stephen Spielberg has decided he would go against the traditional conventions of other war film genres, and to use some other very effective techniques to create the atmosphere of war, usually the hero survives whereas in this successful film the hero dies which is unusual and upsetting. Spielberg had used the effect of ‘desaturated’ colour in the film which symbolises sadness as it is not bright and cheerful which is normal in Hollywood films. The film is additionally made very realistic as he used a hand held camera to make you feel as if you were along side the other soldiers experiencing their fate on the beach, as they engaged in combat. The viewer becomes one of the men focused on survival more than fighting the German forces.

The film commences with a black screen and classical music playing in the background, a piece called ‘Hymn to the fallen’; this helps symbolize sadness as ‘hymn to the fallen’ is  a piece associated with war and death and it is not an uplifting tune. The first thing you see is the ‘Stars and stripes’ flag fluttering in the wind; then it cuts to a close up of the man’s feet and tilts up towards his face. This intrigues the viewer by posing questions such as ‘who is he?’ and ‘where is he?’; it then cuts to a medium shot of a family looking concerned and you can hear ambient sounds such as trees rustling in the wind, the flag fluttering, waves crashing down into the sea which helps symbolize a peaceful calm setting.

The film includes an elderly veteran and his family visiting a Normandy American cemetery and memorial and we initially see the veteran walking to a headstone, falling to his knees before it and losing his composure. His family gather around him and the scene flashes back to a distressing,  graphically disturbing re-creation of the landing of the first wave of soldiers on Ohama beach, during the WWii invasion of Normandy. The film focuses on one captain, John H Miller, who eventually manages to lead a group of ten men through the dense German beach defenses to reach the defensive lines overlooking the beach.

A close up to the defensive iron hedgehogs appears and the classical music abruptly stops; now you can only hear loud waves crashing. The film is subtitled ‘dog green sector Ohama beach’ the purpose for this is so that the viewer knows the exact location. A landing craft is next seen through a long shot, they use the free cam for the first time in this film as the volume of the waves increase rapidly. It is edited and cuts to close up’; soldiers hands are shaking to emphasise their nerves and the camera zooms out which shows the main character and the immediate background. The soldiers on the landing boats are: being sick over each other; chewing gum to get rid of nerves; kissing cross around their neck and this was so Spielberg could shoe their nerves

The main soldier is giving instructions which you can barely hear because of the energetic, action packed atmosphere, this is used for realism to reflect what they endured, to show how impossible it was to communicate. It cuts to a horrific shot of the whole platoon being killed. As the boats doors are opened you can hear the sound of; bullets ricocheting off boats, bombs exploding and these entire makes the viewer experience what the soldiers did, making you feel for their safety and sympathise with them.

The director uses a clever device, blood on the lens of the camera which is designed to replicate the vision from a soldier, who is unable to see what is happening clearly. Spielberg used 30 different camera shots in one minute, this has three purposes. It shows everything that is happening; it increases tension and helps to show the Americans helping each other, despite trying to save them selves.

A free cam shows images of a boy crying, a man explicitly having his leg blown off, a man exploding in flames, and a man retrieving his arm to show the range of things happening to the troops and to further show the experience of the soldiers. The sound mutes and the shot zooms in of Miller’s face he is confused, suffering from nerves and shellshock. The four minutes show that survival was the main issue for these soldiers; they were unable to mount an attack when facing suck a terrible attack themselves.

The end of the battle ends with a close up of Captain Miller’s hand shaking out of control. The camera zooms into a close up of his eyes and cuts to show the audience his view point. The camera pans and zooms in slowly on to the back pack with the wording ‘Ryan’. The music is faded and the wave sounds peaceful after the prolonged noise. The sad classical music adds to the seriousness of the images as you see the devastation caused across the whole beach.

I think the film has a shocking but entertaining quality to it, I was surprised by the amount of realism gained in the processing of the film. I enjoyed watching the film ‘Saving Private Ryan’ because Steven Spielberg used some amazing techniques to entertain the viewer, there were many cliff hangers to build tension and make the viewer more interested in the film. I found the opening battle scene very realistic and shocking because Spielberg used many different camera angles and shots to  make it feel as if you were experiencing the battle in first person.