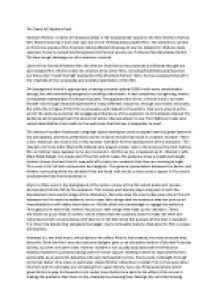 ﻿The Game of Shadows Resit Sherlock Holmes: A Game of Shadows (2011) is the long awaited sequel to the first Sherlock Holmes film. Robert Downey Jr and Jude Law star in this thrilling action packed film. The storyline is carried on from the previous film; Sherlock Holmes (Robert Downey Jr) and his sidekick Dr. Watson (Jude Law) join forces to outwit and bring down the fiercest enemy yet, Professor Moriaty (Jared Harris). The face tough challenges to this notorious criminal. Like the first Sherlock Holmes film, the director Guy Ritchie has produced a brilliantly thought out and detailed film. Ritchie is also the director of six other films, including RocknRolla and Revolver, but these don?t reach the high standards of the Sherlock Holmes? films. He has surpassed himself in the creativity of the screenplay and overall presentation of the film. The background mood is appropriate, showing a seemly upbeat 1890?s with some considerable energy, but with something dangerous rumbling underneath. A vast conspiracy is beginning, thanks to the great mathemation Professor Moriarty. ...read more.

This tension and anxiety plays a key part in both the development and overall image of the characters. Not only does the music play a key role in the link between the film and the audience, but so does little things that the audience may not pick up on immediately but will realise them later on. Ritchie often uses anchorage to engage the audience. Throughout the entire film, Holmes focuses on little things that make up his character. These are shown as quick flicks on screen, which means that the audience doesn?t really see them but remembers them unconsciously until later on in the film when the purpose of the shot is revealed. It is these tiny details that alongside the bigger, more noticeable features that give this film a unique atmosphere. However it is not only music, which adds to the effect Ritchie, has created; the mise-en-scene also does this. Both the film?s arts and costume designer give us an attractive version of the late Victorian society, but with a modern slant. ...read more.

They have done this very cleverly by concealing Moriarty in the previous film, to build up the suspense in awaiting his entrance. By revealing him early on in the film, the Mulroney?s? achieve their aim of revealing part of Moriatiy?s character, but only a glimpse so the audience is still shocked by some of Moriarty?s acts of terror. Another resource for the Mulroney?s is the story of The Final Problem for the film?s climax, in which Holmes and Moriarty, in which Holmes and Moriarty encounter at a 2summit conference2 beside the Reichbach falls. In my opinion, this is Guy Ritchie?s best film and one of the best films of the year. Its humourous side shows an element of fun, while its seriousness comes through as an undertone, giving the film depth and structure. This film is amusing and intriguing all rolled into one. The continuous line of clues stretches both the audiences mind and imaginations as they strive to keep up with Holmes while he discovers more clues and find out their significance to stop Moriarty. Overall, this film provides a thrilling, action-packed, interesting and mind-boggling view on the traditional Sherlock Holmes. No. of word: 1085 words ...read more.