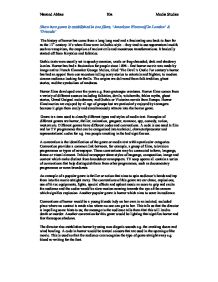 Show how genre is established in two films, 'American Werewolf in London' & 'Dracula' The history of horror has come from a long long road and a fascinating one back to four far as the 13th century. It's when films were in Gothic style - they tend to use supernatural motifs such as vampirism, the eruption of ancient evils and monstrous transformations. It basically started off from fairytales and folktales. Gothic texts were usually set in spooky mansion, castle or frog shrouded, dark and shadowy locales. Horror has had a fascination for people since 1896 - first horror movie was made by image native French filmmaker George Melies, titled 'The Devil's Castle For century's horror has had an appeal from our ancestors telling scary stories to entertain and frighten, to modern cinema audience looking for thrills. The origins are delivered from folk tradition, ghost stories, and the symbolism of madness. Horror films developed over the years e.g. from grotesque creatures. Horror films comes from a variety of different sources including folktales, devils, witchcrafts, fables myths, ghost-stories, Grand Guignol melodramas, and Gothic or Victorian novels from Europe. Horror films/movies are enjoyed by all age of groups but are particularly enjoyed by teenagers because it grips them easily and simultaneously attracts into the horror genre. ...read more.

The castle appears to be Gothic with stylistic arches, high sealing with no natural light just as mentioned with shadows. Conventions for the 'Dracula' film are the narratives that plot their victim's journey to be broken and the victim then has to walk. This classical convention clearly signifies audience (dramatic irony) the victim's root to its own death. Another convention would be the score which is played when Jonathan Harker enters the suspicious castle, there is a dramatic scene that signifies something bad is approaching towards the victim. Jonathan Harker meets the vampress who seems to introduce her from no-where. Audience watch the vampress revealing her character as she divulges her fangs which expresses horror in vivid detail. By this point will be definite about the genre they are watching. The vampress tries to attract Jonathan Harker straight away; her second move was to stimulate disturbance. Lastly her final step was to stimulate the shambolic murder. The Audience know that Jonathan Harker is passing through these difficult stages however Harker doesn't have a clue - this is known as dramatic irony. When the vampress leaves her victim that is J. Harker, the eyes of the camera seem to rotate on the superior significant character at a low angle shot to represent Dracula as a supreme and a villainous character. ...read more.

For example, both films introduce their characters with broken journeys. These wrecked expeditions increase their chances of not surviving in a particular habitat. This once again is a very classical convention that is used in both movies to signify the similar layout to the outcome. Also, characters in both films are clearly untreated and are not greeted to where the go - this signifies that something 'fishy' is going in the area that is not so pleasant. Once again both films are set in dark places under the mise'n'scene. This is a clear signification to the horror genre that the place they are in is 'spooky and tongue-tied'. Finally, victims in both films face severe distortion which without a doubt tells us that the victims will not survive for long. Whilst 'Dracula' is a very different film from 'AWIL' both films have generic model. For example victims who turn out to die, a lady who is the centre of attention asking for help from the victim or getting in a sexual relationship a 'baddie' who causes a lot of havoc and destruction. These all are the significant characters that play major roles in films. I believe that the audience easily recognise the genres of both 'Dracula' and 'AWIL' by codes and sets of conventions in the way that they are constructed from the basic horror genre. ?? ?? ?? ?? Naveed Abbas 10a Media Studies ...read more.