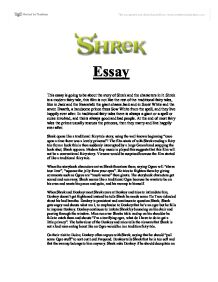 Essay This essay is going to be about the story of Shrek and the characters in it. Shrek is a modern fairy tale, this film is not like the rest of the traditional fairy tales, like in Jack and the Beanstalk the giant chases Jack and in Snow White and the seven Dwarfs, a handsome prince frees Sow White from the spell, and they live happily ever after. In traditional fairy tales there is always a giant or a spell or curse involved, and theirs always good and bad people. At the end of most fairy tales the prince usually rescues the princess, then they marry and live happily ever after. Shrek opens like a traditional fairy tale story, using the well known beginning "once upon a time there was a lovely princess"! The film starts of with Shrek reading a fairy tale from a book this is then suddenly interrupted by a large Green hand snapping the book shut, Shrek appears. Modern Rap music is played this suggests that this film will not be a conventional fairy story. Viewers would be surprised because the film started of like a traditional fairy tale. ...read more.

Lord Farquaad gets three beautiful women to choose from, he uses very formal language: Perfect bride for the perfect Groom. At the end Lord Farquaad orders the knights to get THAT out of my sight, he is referring to the Ogre. He tells the knights to arrest Fiona when he sees her after sunset, and he still proclaims himself as King, even though the marriage has been abandoned. The Director of this film has used a wide range of camera angles and shots in this film. When Shrek scares the storybook characters away there is a close up shot of his mouth to give the impression that he is giving to eat them, the darkness creates further tension. Again when the storybook characters arrive with orders from Lord Farquaad telling Shrek that he needs to move out of his swamp, the low angle shot makes Shrek appear threatening as he looks down, towering over these characters, the characters then run away. Tension and unease is built as Lord Farquaad is introduced-his guard wearing a Balaclava, and the first shot we see of Lord Farquaad is of his hands not his face, he is putting on a pair of gloves as if he means business. ...read more.

The film makers use music and sound effects to show the persons mood and how they feel. Donkey is a very important character in Shrek, infact one of the main. He follows Shrek back to the Swamp and ignores the "Beware of Ogre" sign, this shows that he isn't scared if Shrek and that he's an Ogre, even after reading the sign he still refuses to heed Shreks advice to leave him alone, Donkey lightens the atmosphere at the tournament by making it look like a comedy/funny scene, when Donkey returns after finding flowers he looks at Shrek and Princess smiling at each other and says "my, isn't this romantic". He also acts like Shreks advisor, Shrek listens to him when he is having difficulties. In traditional fairy tales, Ogres are man-eating beasts. The Prince usually rescues the Princess, they marry and live happily ever after. The makers of Shrek use presentational devices to reverse this tradition, this time the Ogre is good and the Prince is evil. The producers of Shrek have really challenged the stereotypes by changing their characteristics, such as making the Ogre good and the Prince bad. Shrek has reversed the way people think about fairy tales. ...read more.