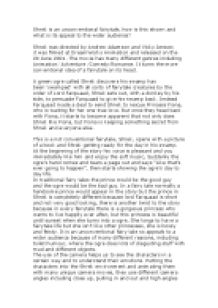 Shrek is an unconventional fairytale, how is this shown and what is its appeal to the wider audience?

﻿Shrek is an unconventional fairytale, how is this shown and what is its appeal to the wider audience? Shrek was directed by Andrew Adamson and Vicky Jenson; it was filmed at DreamWorks Animation and released on the 29 June 2001. The movie has many different genres including Animation/ Adventure /Comedy/Romance. It turns the more conventional idea of a fairytale on its head. A green ogre called Shrek discovers his swamp has been 'swamped' with all sorts of fairytale creatures by the order of Lord Farquaad, Shrek sets out, with a donkey by his side, to persuade Farquaad to give his swamp back. Instead Farquaad made a deal to send Shrek to rescue Princess Fiona, who is waiting for her one true love. But once they head back with Fiona, it starts to become apparent that not only does Shrek like Fiona, but Fiona is keeping something secret from Shrek and everyone else. This is a not conventional fairytale, Shrek, opens with a picture of a book and Shrek getting ready for the day in his swamp. At the beginning of the story his voice is pleasant and you immediately like him and enjoy the soft music, Suddenly the ogre?s hand comes and tears a page out and says ?Like that?s ever going to happen?, then starts showing the ogre?s day to day life. ...read more.

He tries to make them frightened by reminding them that he is an ogre. Although Shrek is an ogre he acts more like a conventional prince. In contrast to Shrek, Lord Farquaad is cruel. He watches the torture of the ginger bread man, making him feel bad, then throws him in the garbage. Lord Farquaad is greedy, mean and cruel. This is black humour where jokes are made about other peoples miss fortune and ironic humour where the outcome is unexpected. We can see this by how he treats others and we know he only wants to marry the princess so he can become king. Lord Farquaad is all set to marry Princess Fiona, until he sees that when the sun sets she turns into an ugly ogre. Lord Farquaad speaks to her in a cruel way, and he orders his knights to 'get that out of my sight.' Lord Farquaad calls off the wedding, but he still proclaims himself King, so he definitely not a conventional prince. The clever use of close-up makes Shrek seem large and the others small. Close-up shots are also useful for focusing the viewer's attention on the characters? emotions. The close-up camera shots of Princess Fiona and Shrek smiling shows their human qualities. ...read more.

Shrek rescues the princess, falls in love and has meaningful friendships. Shrek is kind and considerate of other people's feelings throughout the film. Although Lord Farquaad looks like a Prince, his actions suggest he is evil. Lord Farquaad is very mean, he tortures the ginger bread man, steals Shrek's swamp, makes his knights put their lives on the line, turns Princess Fiona down when he finds out she has an ugly side, and claims to be king even though he did not marry Fiona. The story of Shrek uses presentational devices to reverse our expectations, so that by the end of the film Shrek, although he is the ogre, seems like a prince. Lord Farquaad, although he is a Lord, seems more like an evil, mean ogre, for example when we see him in his castle instead of being surrounded by pleasant images, it shows him torturing the ginger bread man and showing how mean spirited he really is. Perhaps the message of the story is that you can not judge a book by its cover. It is interesting how the filmmaker did not make the characters of Shrek and Lord Farquaad fit into traditional roles, this made a huge effect on the audience because of the humour included in this film, its target audience changed completely. ...read more.