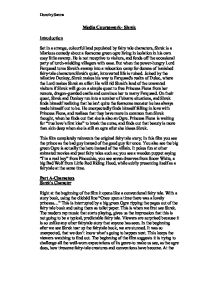 Shrek.This film completely reinvents the original fairy tale story; In this film you see the prince as the bad guy instead of the good guy for once.

Media Coursework- Shrek Introduction Set in a strange, colourful land populated by fairy tale characters, Shrek is a hilarious comedy about a fearsome green ogre living in isolation in his own cosy little swamp. He is not receptive to visitors, and fends off the occasional party of torch-wielding villagers with ease. But when the power-hungry Lord Farquaad turns Shrek's swamp into a relocation camp for dozens of banished fairy-tale characters Shrek's quiet, introverted life is ruined. Joined by the talkative Donkey, Shrek makes his way to Farquaad's realm of Duloc, where the Lord makes Shrek an offer: He will rid Shrek's land of the unwanted visitors if Shrek will go on a simple quest to free Princess Fiona from her remote, dragon-guarded castle and convince her to marry Farquaad. On their quest, Shrek and Donkey run into a number of bizarre situations, and Shrek finds himself realizing that he isn't quite the fearsome monster he has always made himself out to be. He unexpectedly finds himself falling in love with Princess Fiona, and realises that they have more in common than Shrek thought, when he finds out that she is also an Ogre. Princess Fiona is waiting for "true love's first kiss" to break the curse, and finds out that beauty is more than skin deep when she is still an ogre after she kisses Shrek. This film completely reinvents the original fairy tale story; In this film you see the prince as the bad guy instead of the good guy for once. You also see the big green Ogre is actually the hero instead of the villain. It pokes fun at other animated movies and past fairy tales such as; you see a wooden puppet saying "I'm a real boy" from Pinocchio, you see seven dwarves from Snow White, a big Bad Wolf from Little Red Riding Hood, while subtly presenting itself as a fairytale at the same time. ...read more.

Lord Farquaad tortures the poor gingerbread man saying "run, run, run as fast as you can..." as he tries to pull his buttons off. The gingerbread man shouts "you are a monster!" Lord Farquaad replies to this "I am no monster! YOU are, and the rest of that fairy tale trash poisoning my perfect world!" We see a sort of Hitler stereotype here, a very racist man. It makes the audience hate him immediately and know he is the villain in the story. When the magic mirror is finally located, Farquaad speaks to it: "Mirror mirror on the wall? Is this not the most perfect kingdom of them all?" To which the mirror replies, "Technically you are not a king yet, until you marry the princess!" The mirror then shows three beautiful princesses to choose from (a parody of "Blind Date"), and lets Lord Farquaad chose one of them. The effect of this is seeing Lord Farquaad's true character; he is a mercenary rather than a romantic. When Lord Farquaad comes to collect the Princess, after all Shrek's work on rescuing her, says "Beautiful fair flower Fiona will you be the perfect bride for the perfect groom?" From this line we really see just how arrogant and vain this tiny little man is. He is prepared to conform to the stereotype when it suits his own interests. At the end of the film, the un-holy wedding is interrupted by Shrek, Donkey and the besotted Dragon. When "true loves first kiss" transforms Princess Fiona into an Ogre, Lord Farquaad orders the knights to "get that out of my sight." This shows he really didn't care about her at all and just wanted to become King. After this he proclaims himself King, even though the marriage has been abandoned. In this film we quickly learn that the Prince is not like a traditional fairy tale character because; First of all he's a coward. ...read more.

He not only shows us that he would stand by Shrek through anything but makes us laugh and takes the seriousness out of the event. When Donkey returns after finding flowers, he notices Shrek and Princess Fiona smiling at each other. He says "my, isn't this romantic?" Donkey is used here to expose Shrek and Fiona's feelings. Because Shrek and Fiona find it hard to share their feelings and hide behind all their layers, Donkey helps to peel off some of these layers. Donkey is the complete opposite to Shrek and Fiona, as he is not to express what he feels. Donkey acts as Shrek's advisor, as Shrek has been cut off from humanity for a while, he needs guidance sometimes in wooing Fiona etc. Shrek actually listens to Donkey, which shows that he cares about what Donkey thinks and has respect for him. The donkey is an important character because he; exposes the genuine Shrek, gives Shrek insight to his own feelings (Donkey knows Shrek, better than he does), brings humour into the most serious of situations, makes Shrek realise that not all people will judge him for his looks. The makers of Shrek use presentational devices to reverse the tradition, to reveal the Ogre as good and the Prince as evil. The makers not only use brilliant characters, but; camera shots (to reveal true feelings or exaggerate a situation), the settings that are the complete opposite to what we'd expect, lighting to emphasise the character's happiness or misery, music and sound effects to build up anxiety in us and un-certainty, Donkey to pull back the curtain to reveal the true Shrek. The film turns all the out-dated fairytale clich�s on their head. It takes scenes from well-known Disney movies and completely re-invents it. This film is not only a unique new kind of fairytale, but also has a very valuable message behind it: That you shouldn't judge a book by its cover and that beauty is only skin deep. In this story the ugly people aren't evil and the handsome people aren't the heroes. Dorothy Savva ...read more.