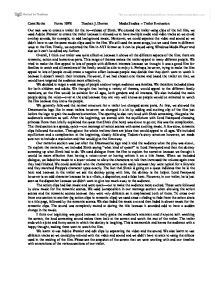 Our task was to create a trailer for the re-release of Shrek. We created the trailer using clips of the full film, we used Adobe Premier to create the trailer because it allowed us to have multiple audio and video tracks so we could overlap sounds, for example, to add background music. Moreover, we could separate the video and sound so we didn't have to use the same music clips used in the film. We still used the same songs, but we used them in different ways to the film. Finally, we exported the film in AVI format so it can be played using Windows Media Player and also so it can't be edited any further. Overall, I think our trailer was quite effective because it shows all the different aspects of the film; there are romantic, action and humorous parts. This range of themes makes the trailer appeal to many different people. We tried to make the film appeal to lots of people with different interests because we thought it was a good film for families to watch and all members of the family would be able to enjoy it. ...read more.

The opening is also very loud with Shrek screaming, this grabs the audience's attention as well. After the beginning, we started with the equilibrium with Lord Faarquard choosing princess Fiona then briefly explained the quest that Shrek (the hero) was about to go on; this was the complication. The third section is a speedy, quick-cut montage of action scenes with some exciting music. A few slow, romantic clips followed the action. Throughout the whole trailers there are jokes that would appeal to all ages. We included equilibrium and a complication at the beginning, closely following Todorov's story structure however, we made sure not to include a resolution and that would give the film away. Our narrative section was just after the Dreamworks logo and it told the audience what the play was about.. To explain the narrative, we included Shrek saying "what kind of quest?" to Lord Faarquard and then the donkey summing up what Shrek had to do. We used dialogue from the film to explain the narrative because we thought it would be more effective than having a voice-over or having written it on a title frame. ...read more.

We also faded the music out and then faded in slower music for the romantic clips. The sound was completely muted at during the title because it sounded odd to have a sudden change in the music. I think our beginning was good because it really grabs the audience's attention and if anyone isn't watching the screen, the loud screaming sound makes them look at the screen and watch the rest of the trailer. The trailer ends with a joke and funny scene in which the donkey is laughing. This is memorable and leaves the audience with a happy thought, making them want to watch the film. We learnt to use Adobe Premier and edit clips by separating the video and the sound. We also learnt to use different tracks so we could play around with the video and sound and we didn't have to stick to using the effects used in the making of the film. Please see the snapshot of the screen that we were working with and our timeline with annotations of the various sections of our trailer. Cami Rothe Form: 10PE Teacher: J. Durran Media Studies - Trailer Evaluation ...read more.