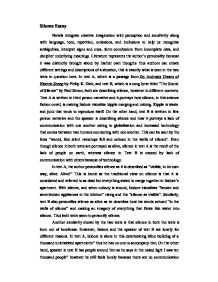 Silence. n text A, which is a passage from Do Androids Dream of Electric Sheep by Philip K. Dick, and text B, which is a song lyric titled The Sound of Silence by Paul Simon, both are describing silence, however in different contexts

Novels integrate creative imagination with perception and sensitivity along with language, tone, repetition, omissions, and inclusions to help us recognize ambiguities, interpret signs and cues, form conclusions from incomplete data, and decipher underlying meanings. Literature represents the author’s personality because it was distinctly brought about by his/her own thoughts thus authors can create different settings and descriptions of a situation, this is exactly what is seen in the two texts in question here. In text A, which is a passage from Do Androids Dream of Electric Sheep by Philip K. Dick, and text B, which is a song lyric titled “The Sound of Silence” by Paul Simon, both are describing silence, however in different contexts. Text A is written in third person narrative and it portrays how silence, in this science fiction novel, is making Isidore visualize kipple merging and mixing. Kipple is waste and junk that tends to reproduce itself. On the other hand, text B is written in first person narrative and the speaker is describing silence and how it portrays a lack of communication with one another owing to globalization and increased technology that comes between two humans connecting with one another. This can be seen by the lines “words, like silent raindrops fell and echoed in the wells of silence”. Even though silence in both texts are portrayed as alive, silence in text A is the result of the lack of people on earth, whereas silence in Text B is caused by lack of communication with others because of technology.

In text A, the author personifies silence as it is described as “visible, in its own way, alive. Alive!” This is ironic as the traditional view on silence is that it is considered and referred to as dead but everything stated to merge together in Isidore’s apartment. With silence, and when nobody is around, Isidore visualizes “broken and semi-broken appliances in the kitchen” rising and the “silence as visible”. Similarly, text B also personifies silence as alive as he describes how his words echoed “in the wells of silence” and making an imagery of everything that flows like water into silence. Thus both texts seem to personify silence.

Another similarity shown by the two texts is that silence in both the texts is born out of loneliness. However, Isidore and the speaker of text B are lonely for different reasons. In text A, Isidore is alone in this deteriorating blind building of a thousand uninhabited apartments” thus he has no one to accompany him. On the other hand, speaker in text B has people around him as he says in the naked light I saw ten thousand people” however he still feels lonely because there are no communication between these ten thousand people. This is shown by “people talking without speaking” and also “people hearing without listening” which creates “the sound of silence”. Thus Isidore is unfortunate to have no friends on earth and is isolated from public. On the other hand the speaker of Text B is surrounded by people however these people take their surroundings for granted because of increasing technology as shown by “the neon god” “flashng out its warning” which symbolize TV or other technologies such as the computer, thus are unable to appreciate it as they isolate themselves from other people around.

Furthermore, both texts also depict the results of silence in both situations. In text A, as it says “eventually everything within the building would merge” and “he himself would be dead” portrays how with silence, kipple will start to pile up until there is no space for Isidore anymore as he will be buried with the piled up “pudding-like kipple”. In comparison, in text B shows how silence [is] like a cancer grows” thus showing how with technology is cancerous as it leads to lack of interaction/communication, till the point that communication between one and another completely breaks down just. This is because in reality, people have to interact with each other and are dependent on each other. As a result, even though both texts have different descriptions of the result of silence, both are associating it to death as text A depicted death as “lung-less” and text B portraying it with “cancer”.

Thus, both texts are similar in the way they personify silence and also how the characters in both texts feel that silence is born out of loneliness. They also associate silence to death. However the contrast is that in text A silence exists because Isidore is living alone with no one around, while in text B, there are “ten thousand people” but ironically there is still silence between them. Furthermore both authors end with the word silence to emphasize the effects of it to the viewers and make the viewer think about their surrounding and appreciate it while it exists. As a result, with both texts, silence is considered somewhat dangerous and that the message of text B is important when the speaker criticizes and calls people “fools” as they are isolating themselves due to technology thus resulting in a lack of communication. Which is integral to ones survival on earth. While “every object within [Isidore’s] range of vision, as if it-the silence- meant to supplant all things tangible” in Text A, “no one dared disturb the sound of silence” in text B.